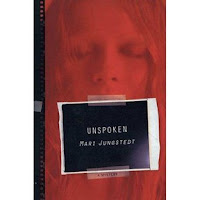 The second of Mari Jungstedt's Gotland crime novels is out, with the title Unspoken (not a translation of the Swedish title, which would be more like "In the Night's Silence" or even "In the Still of the Night"). The first novel in the series was Unseen--the tendency to give a crime series a repetitive title sequence of some sort is pure marketing, but I can attest that the Swedes do it, too. When Mel Brooks's film The Producers first appeared in Sweden, they used the title Det Våras För Hitler, or Springtime for Hitler. So when Blazing Saddles came out, they called that Det Våras För Sheriffen (Springtime for the Sheriff) and so on: Det Våras För Frankenstein (that one's obvious) and on and on--the strangest one, to me, is Det Våras För Världshistorien (Springtime for History of the World?!). These days, the distributors are more likely to just keep the English title for new films and TV shows released there (would an American distributor dare to keep a Swedish title? Could the moviegoing public in the U.S. pronounce a Swedish title?). Anyway, Jungstedt's Unspoken deals with the murder of an alcoholic photographer who has just won big at the harness-racing track. The police (led by chief detective Anders Knutas, who is a bit stiff, in a slightly comic way, even consciously so, within the narration that sticks to his point of view) pursue a widening series of leads, some provided by a TV journalist sent over from Stockholm (just as he was in the first Knutas novel, and his affair with a married mother of two continues--regardless of the fact that she's not involved in the case, as she was in Unseen). There's plenty of dark stuff in the book, in an unspectacular way--no serial killers, nobody returning from the dead, nobody plotting to kill the Prime Minister--but that, I think is one of the strengths of the majority of new crime novels coming from Scandinavia. The authors seem to find plenty of threat and drama in ordinary life (which is, as I've mentioned before, one of the characteristics of noir as a genre, and one of the reasons I'm drawn to that sub-class of crime fiction). For me, there's a bit too much "soap opera" here--the private lives of Knutas, the reporter and his girlfriend, and even those involved in the crimes threatens to tip the balance between the criminal proceedings and the problems at home, etc. But Jungstedt is skillful in rebalancing the story and moving the crime and its investigation forward. I like the fact that Knutas doesn't inspire awe in his team--they're irritated by some of his stiffness and his jealous reaction to a Stockholm detective brought in for the case (whom everyone else likes immensely). That, more than his arguments with his wife, give depth to the character and to the life of the police station. There is one device in this story that I find a bit awkward--one thread of the plot involves a 14-year-old girl who is lonely and suffers from what's called the Borderline syndrome (she's cutting herself, for one thing). Part of her story is told in the "now" of the narrative (each chapter is headed by a date), and part in irruptions of text titled "Several Months Ago." I think I'd have been less irritated if these sections were separated out more from the rest of the narrative, and it may be that it's the publisher rather than the author who is responsible for the way the story is textually laid out. But as is, it seems like a "make-do" device rather than an elegant way of integrating flashbacks. The novel ends with an unconventional cliffhanger (for a crime novel, anyway), so I guess there are more Knutas & co. novels to come. I'll keep reading them, for the almost sinister ordinariness of the characters and the stories, as well as the, to me, exotic setting. However, the "solution to the crime" in Unspoken seemed a bit contrived to me, though entirely in line with the crimes. There is a passage in the novel that illuminates in an interesting way one of the differences between Scandinavian and American or English crime fiction: we're used to hard-boiled detectives (and reporters) and the adherence of their Scandinavian counterparts to definite rules of behavior is a little startling. Johan, the reporter who has seduced a married Gotlander, is insistent about not crossing boundaries, like publishing a name that the police want kept secret or interviewing a woman who's in shock after the death of her daughter. The ethics are admirable, but we're so used to hard driving reporters (and cops) who ignore the rules that the humane and rule-bound Scandivian characters in crime fiction (with the notable exception of the novels of Jo Nesbo) mark a distinct cultural difference. That difference, too, is one of the exotic attractions of the current crime wave from the far North. A personal note: I will probably not be blogging for the next week or 10 days--I'll be sitting in a cafe in Barcelona with a Vazquez Montalban novel...