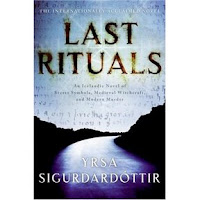 Yrsa Sigurdardóttir's newly translated novel, Last Rituals, has a motto or subtitle on the cover (An Icelandic Novel of Secret Symbols, Medieval Witchcraft, and Modern Murder) that is very misleading, but does anticipate a key thread of the book. The leading character, Thóra Gudmundsdottor, shares a good deal with Erlendur, the central character of Arnaldur Indridason's estimable Reykjavik police procedurals, though Thóra is a lawyer rather than a detective. Both are divorced, both have problems with their children, and both are without a companion--but where Erlendur is depressed, Thóra is just harried; where Erlendur's daughter is a junkie, Thóra's 16-year-old son has gotten into a more typical teenage problem (though almost as disruptive for the family). Erlendur's private life is a mess (as is his apartment), but Thóra's is a more "normal" kind of mess (keeping track of the kids, the house, the ex-husband, her job, etc.)--and the normality of her life is frequently exploited for both contrast and comic effect amid the violent and bizarre discoveries in the story. Last Rituals also shares a couple of things with Arnaldur's: Iceland is itself an important element in the books; there are overtones of a dark past (much further in the past in Yrsa's book) and the story moves forward with the doggedness of an investigation rather than the trappings of a thriller. These are procedurals, though Last Rituals doesn't follow the police for the most part. The rituals of the title, as well as the subtitle on the cover, imply witchcraft and metaphysics, but Yrsa's novel is really more about academia than devil worshippers. But she skillfully uses the sensational aspects of the deceased student's life and research (and Icelandic history) to keep the reader interested through the slow accumulation of evidence (the victim is a "modern primitive," an apt description of the subculture of piercings and body modifications). In brief: a German student in an Icelandic university falls out of a closet, dead and with his eyes removed, onto the head of his department. The body also has a symbol carved on it. The family, not believing in the guilt of the drug dealer arrested by the police, sends a family lawyer to Iceland to locate a local lawyer who speaks German and is willing to help them investigate the circumstances of their son's death. The lawyer, alternately stiffly formal and sarcastically flirtatious, vies with Thóra for the novels center of gravity, though the German remains slightly opaque as a character. Thóra's naiveté ragarding the salacious and strange revelations of the victim's death and his academic interests parallels a frequent pattern in Scandavian crime fiction--as for example in the adventurous sexual escapades at the center of one of Helene Tursten's books, in which Detective Irene Huss reacts in a less than hard-boiled way to the salacious facts of the case. Though Scandinavia was once famous for its porn, Scandinavian crime fiction projects a rather tamer cultural milieu. But at least in the case of Last Rituals, Thóra provides a moral center that anchors the book. Yrsa's book is a solid entry, full of fascinating historical and cultural detail, in the Scandinavian crime wave. It avoids clichés, builds slowly, but pulls the reader along without the devices of pulp (such as, when the story flags, throw in another murder). The sensational elements are handled in a nonsensational way, and I found myself drawn in by the historical references and Thóra's investigative efforts more than the post-adolescent fascinations of the circle of students at the ostensible center of the story. So the subtitle or teaser on the novel's cover misleads to the extent that it suggests a novel focused on witchcraft, but does suggest the bloody history of Medieval and Renaissance Europe that anchors the story. I hope Yrsa's novels find other Maguffins that are as effective in her later books, and look forward to finding out.
Posted by Glenn Harper at 5:37 PM