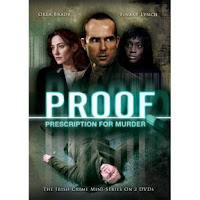 Both seasons of Proof, the Irish TV crime series, are about the interface between industry and politics in the new Ireland, the scene set by the economic miracle of the Celtic Tiger, integration into Europe, and new immigrant populations. The first series emphasized the political side of the equation, and the second series the commercial side (though the two series are equally cynical about the outcome of that particular marriage in the modern world). Both series are, incidentally, widely available as multi-zone DVD sets of 2 DVDs each. The second series has a stylistic tic that is both effective and irritating: a constant reference to the Dublin Spire, a new monument in the place of the infamous Nelson Column on O'Connell Street near the equally infamous central post office, a building at the heart of Ireland's Easter Uprising in 1916. The Spire is a peculiarly contemporary monument, in that it doesn't monumentalize anything in particular, and was designed not by an artist but by an architect. Proof returns to images of the Spire at all times of day, in all sorts of weather, in close and distant views, showcasing the abstracted geological motifs etched into it's bright metal surface as well as the impressive height of its needle rising high above today's Dublin. In the end, it is an impressive symbol of the sleek contemporary city that hides the ugly racism, corruption, and criminal indifference that are the subject of the series itself. More on the spire in a minute. The series: Two stories intertwine and ultimately come together. An African immigrant trying to operate a small shop in Dublin is harassed by anti-immigrant-skinhead-nationalists, resulting in the death of her child in an arson fire. And an out-of-work scientist who has set up a meeting with Terry Corcoran (played by Finbar Lynch) but is pushed into oncoming traffic in front of Terry's eyes. Meanwhile, Terry's ex-girlfriend Maureen Boland (Orla Brady) is investigating corruption in a drug company that's about to be taken over by an American conglomerate. Terry is a sort of Jack Parlabane relocated to Ireland (see Christopher Brookmyre, if you don't know Parlabane) and deprived of his near-superpowers and most of his sense of humor. He stirs up trouble, gets lectured by the police, and tries to save everyone that's under threat from the authorities, the skinheads, the Americans, the Irish hitman and his drug-company boss, etc. The show is a little formulaic, but better than most of what's on U.S. and U.K. TV, and it's great to get a tour of contemporary Dublin's seedier side. On the non-seedy front, back to the Spire--more than any other monuments I can think of, it resembles the Eiffel tower (both in its nonreferentiality and in the way it wears its technology on its sleeve) or the Washington Monument, here in DC. But the obelisk form of the Washington Monument has certain triumphal associations, and as you may or may not know, the Washington monument was originally designed as a temple surrounded by huge obelisks, but the plan ran out of money after only part of the first obelisk was completed. The stub of the monument stood on the Mall for many years, until a parks department employee unilaterally decided to finish that obelisk and let it go at that. The Spire is equally abstract, but with even less reference (it's not about O'Connell or the Easter Rebellion heroes, though located in the vicinity of those historical figures' memorialization along the same street). The tourist-eye view of the Spire as seen in Proof is probably the Spire at its best--if anyone reading this review lives in Dublin, and therefore lives with the Spire, let us know what you think of it.
Posted by Glenn Harper at 3:42 PM

Glenn -
Dubliners have a habit of giving public art / monuments nicknames - Anna Livia in a fountain, for example, became 'the floozy in the jacuzzi'. The current jibe at the Spire is 'the stiffy by the Liffey'. As for the Spire's significance, or impact ... I pass by it most mornings, and there's a lot to be said for the opinion that suggests that because the piece doesn't stand for anything, or represent anything except itself, that it's as close a monument to shiny, vacuous, self-absorbed modern Ireland as you're likely to need. Maybe that's the point the Proof people were trying to make ...