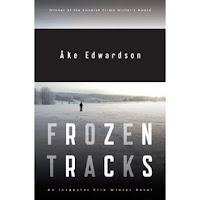 There are more Scandinavian crime novel's coming in the spring (and at least one non-Walander Mankell book that I haven't read) but for now, the recently translated Frozen Tracks by Åke Edwardson is the last in the string of Nordic noir novels that I've been posting about recently. I liked this one better than the two earlier ones by Edwardson that have been translated, because of the considerable tension built up in Frozen Tracks as the police doggedly pursue a couple of possibly related cases. Frozen Tracks illustrates a principle of the mystery or crime novel that I've mentioned before (the novel moves forward by delaying the resolution rather than marching toward it) but also a distinctive feature in the genre: there's no corpse until very late in the novel. That second, distinctive, feature helps Edwardson build tension through the first, universal, principle of delay: the children under threat in this story remain under threat, rather than showing up early on as candidates for autopsy. The daily lives of the cops (which I've mentioned several times as an element that I think many crime novels, including Edwardson's, concentrate on too much) are here used effectively as extensions of the primary plot (glosses, if you will, on the primary thread, which has to do with families and their ills). But the tension in the novel is very frustrating in its reliance on dramatic irony (the theatrical device in which the audience knows more about what's going on than the actors). Very early on, we see (through a policeman's eyes) a key clue to the resolution of the central investigation, but the police themselves do not return to that clue for a few hundred pages. Similarly, we see a good bit of the action from the point of view of one of the perpetrators, so that we know more about what's going on than the police. But there is an inexorability about the criminal's progress as well as that of the police that draws the reader on, almost breathlessly, to the rapid (almost abrupt) conclusion in the last chapter. The plot: two crimes; several young men walking alone are attacked with a blow to the head from behind--they neither see nor hear their attacker; and several children are briefly abducted and then returned to the vicinity of their daycare facilities. The police are clear about the significance of the attacks on the young men (though none of the blows are fatal), but the children are the only witnesses to the child abductions, and no one is sure that they are telling the truth rather than fabricating stories. Only as the abductor escalates his pattern do the detectives move into high gear. There is a bit more teamwork in Frozen Tracks than I remember in the earlier novels featuring Edwardson's Gothenburg detective, Erik Winter, and in that feature of this novel as well as the social conscience of the book, Frozen Tracks reminds me a bit more of the Sjöwall-Wahlöö novels of the '70s (that's a good thing, I would say, though the Scandinavian crime writers must find that comparison both inevitable and annoying). the tone is a bit different from the S-W books, which are in their own particular way very pessimistic and dark (they are among the most noir of police procedurals). Edwardson keeps more of a balance between the sunnier and more shadowy aspects of society and the family, possibly more suitable for today's reader but in a way less philosophical or less "deep" than their predecessor. But lacking any unlikely discovery of unpublished S-W books (or Maj Sjöwall's unlikely return to the roman policier), Edwardson will do very well as compensation.
Posted by Glenn Harper at 12:31 PM