patience of the spider, andrea camilleri 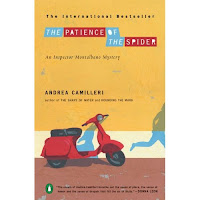 Normally, when a crime novel or series is made into a film or TV series, the novel is far more rewarding, richer, and definitely a more immersive experience. Not always. In the case of Andrea Camilleri's Inspector Montalbano series, the Italian TV series based on it (in which Camilleri has retained a role), the filmed realization is so rich, the setting so convincing, and most of the actors so closely identified with the characters they portray that the films are at the very least an accurate representation (even an alternate realization of the characters and the stories) that seeing the films after reading the stories is fine, but reading the stories after seeing the films is like reading the same novel twice, or perhaps more accurately, reading the screenplay after seeing a movie.

Part of the reason for the unusual appeal of the films is that Camilleri's style as a writer is simple and direct, the characters drawn skilfully in a few strokes and the stories not unnecessarily complicated. The films are also understated, relying on the incredible Sicilian setting and mostly understated performances (with some exceptions--the desk sergeant in Montalbano's unit is the incomparable and almost incomprehensible Catarella, played by Angelo Russo in a performance that dances along the edge between impersonation and lampoon). Luca Zingaretti doesn't look like I imagined Montalbano, not even like Camilleri described him, but he so embodies the role that he's indistinguishable from the character, while he's acting the part (just as he's the embodiment of evil in the wonderful late "prequels" in the La Piovra mafia series from Italian TV). The Patience of the Spider is a typically indirect story, a crime that is not what it seems and a resolution that is not a genre cliche. The novel is, like all the Montalbanos, short, about the same length as those classic Maigret novels or the classic American noir fiction of the 40s and 50s--easily read in a couple of sittings. The great Leonardo Sciascia's Sicilian crime novels are also short, direct, and economical--maybe it's a Sicilian virtue, as well as a throwback to some of the classics of crime writing. Montalbano is, as usual, devious in his use of the media and sympathetic in his attitude toward citizens who may not be strictly remaining within the law (as with a rural woman who sells eggs as well as herself). Livia (his usually absent girlfriend) is present more than usual, to the dismay of Montalbano's housekeeper (one character missing from the TV series) and the occasional disruption of the detective's peace of mind. I won't reveal any more about the plot, and have probably said enough about the series to make it sound tempting--if you haven't seen the TV series, there's a peculiar public tv channel in the U.S. that runs them, and it may be available on your local cable or satellite service under the names MHZ Networks or MHZ World Vision (it's worth checking it out).
Posted by Glenn Harper at 6:47 PM

I enjoyed the books in translation,but as my Italian is not up to it, can you comment re subtitles or (awful) dubbing?

The TV series is shown in the U.S. with subtitles--a good thing even if you speak Italian, since a portion of the dialogue is in a Sicilian dialect. Better to read the subtitles and hear the voices, in my opinion--I hate dubbing.

Thanks for these last two posts Glenn. If there was ever a reason to get a multi zone DVD player [whatever that is] you have given it to me.
One of the grear benefits of the European Union is that the vast amounts of money flowing in to building projects in Ireland and Sicily have given crime writers a wealth of plot material.