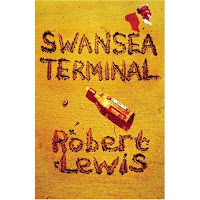 The sequel to Robert Lewis's The Last Llanelli Train is already out in the UK and will be out soon in the U.S., from Serpent's Tail. Swansea Terminal isn't about a train station: Robin Llewellyn, the down and out private investigator of the earlier novel is all the way down and all the way out now. The first part of the novel seems to be treading familiar literary territory, the extreme alcoholic, with all the attending pathos and dark comedy: familiar from Charles Bukowski to Ken Bruen's Jack Taylor books. Both those effects are here in abundance, but Lewis adds an ironic structure andn a crime plot that together give a shape to what is often (in books on alcoholics) shapelessly emotional. I must admit that I almost quit the novel when it seemed as if Llewellyn would stumble from bar to bar and humiliation to humiliation for the whole book--no matter how well written (and Swansea Terminal is indeed very well written) an alcoholic haze is not that entertaining or enlightening. The structure is provided by Llewellyn's last case as a private investigator (which he shirks) and by his sorry life history, in the form of the son he abandoned years before. In both cases, where the plot is going is not where you think. The humor in this novel (much touted by the publisher) is of the very dark variety, and comes more from the ironic plot structure than from banter or comic situations: the conversation and the playing out of events are uniformly bleak. But when the crime aspect of the story kicks in, in the second half, Llewellyn's miserable life history moves toward an almost epic quality (though remaining resolutely down and out). There's a passage worth quoting that provides the logic and the self-loathing inherent in this most noir style of noir: "ironically, down here, in the land of the lawless, as guarded and dishonest as it is, there is a lot more nakedness in your relationships with those around you...Sometimes, I guess, you can feel some wisdom in your disillusionment, some truth in your corruption, that others who do not suffer the same way are missing. You can tell yourself that society can only be seen properly from underneath." The quote goes on to provide further illumination the noir portrait of the bottom of society (it's page 151). There's also a telling comment concerning Llewellyn's membership in a select society, the terminally ill: "We call them courageous because they terrify us." At the end, Llewellyn's struggles and his outlook on life takes on the moving comic resignation of Beckett's characters. One aspect of the book that narrows its scope is the lack of women (even the bottom layer of society is not exclusively male, after all). The one woman character, whom Lewis ultimately calls a "our Cathleen ni Houlihan," a telling critique of modern Wales, perhaps, is portrayed in unrelentingly negative terms. The missing female characters provide an excuse to compare Lewis's Welsh noir with that of John Williams, whose cycle of Cardiff novels is a much more diverse portrait of the underclass, male and female. While Williams is more interested in a cast of characters, Lewis providews a practically apolyptic vision from a single character's narrow point of view. Both are interested in much more than genre fiction, and both challenge the conventions of crime fiction in interesting ways.
Posted by Glenn Harper at 7:10 PM

I am halfway through this book which I find fascinating (from the library) - am trying to ignore the really foul language and don't even know the meaning of some of the swear words (am now 55) but find it compelling reading - spent 7 years in Bridgend and know Swansea very slightly. Will finish the book this week, but have to say, that I did laugh at the description of JD Wetherspoons pub - its like that here too, exactly, and I'm in Surrey