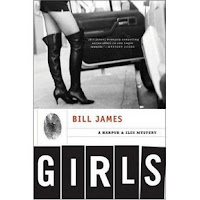 Bill James's Harpur & Iles novels are indirect, satirical, and bleakly comic forays into an alternative reality based on the gritty cities of England. Beneath the novels' brittle, Wodehouse-like surfaces, is there some truth about contemporary life? Truth about crime fiction (and literature in general) abounds in these short novels (the characters are constantly referring to literary greats, and the narrative manipulates the standards and cliche's of crime fiction mercilessly. But regarding a "higher" truth, it struck me while reading the new (in the U.S., anyway) novel, Girls that beneath the mocking tone, the artificial language, and the stylized characters (all of which are great fun) there's also an emotional truth, as much for the villains as the heroes (if anybody can tell one from another in this morally skeptical series). James's invented slang spills over from the dialogue into the narration, especially when the gangsters are speaking to one another: Manse Shale's bad grammar is replicated by the narrator in the early dialogue between Shale and Ralph Ember (one of James's inimitable creations). When Colin Harpur is talking to his daughters (and much of the novel follows his dialogue with them), he's correcting their grammar constantly (especially his younger daughter, Jill), and the narrator is on his toes as well, as if not to offend the sensibilities of the otherwise rough-around-the-edges detective. But what Girls is about more than anything else is the reality and the essential nature of the emotional ties between all the parents and children among the central cast of characters. The emotional truth is buttressed not by sentimentality but by the very skepticism (almost cynicism) of everything else going on in the novel. Harpur at one point quotes Joseph Conrad's Secret Agent, a book with much indirection in its narrative but with powerful feeling at its heart. If Conrad's story is tragic and James's novels are comic (to quote Girls about itself, "very darkly jokey") that's perhaps a measure of the distance between our world and Conrad's, leading perhaps to the notion that there is sociological truth as well as emotional depth to James's comedy.
Posted by Glenn Harper at 1:38 PM

But what Girls is about more than anything else is the reality and the essential nature of the emotional ties between all the parents and children among the central cast of characters.

That has been a little-remarked aspect of James' Harpur & Iles novels, though it has been present at least since Panicking Ralph came on the scene. Ember, Harpur and his daughters, Harpur and Denise, even Iles try to hold families together in their own cracked way, as do some of the gangsters in the earlier books.
===================
Detectives Beyond Borders
"Because Murder Is More Fun Away From Home"
http://detectivesbeyondborders.blogspot.com/