The Arms Maker of Berlin, by Dan Fesperman 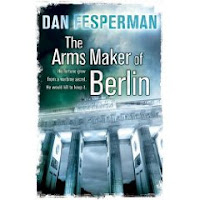 The latest post-cold-war thriller from Dan Fesperman portrays, as one of the characters says, characters who are "Modern Germany made flesh, in all its macabre and tragic grandeur." He does manage to suggest some of that burden of history in The Arms Maker of Berlin, but without portraying the city in as concrete a way as I would have liked (Berlin is a fascinating place to visit, whether in person or on the page). There's a lot of motion in Fesperman's book (characters moving back and forth across the Atlantic, up and down the east coast of the U.S., and across Europe, not to mention across time, in numerous flashbacks to WWII), and a lot is revealed to the reader before the investigator at the center of the book, historian Nat Turnbull, figures it out. There are moments of suspense, lots of Nazis and former Nazis now embedded in Germany after the fall of the Wall, and some interesting material about the White Rose resistance movement in Hitler's Germany. 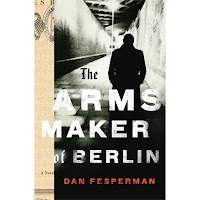 But is it just me: are the Nazis a tired motif by now? Hitler and his minions have certainly been rich territory for fiction (almost too easy as a source for tension and threat). Nazis figure in the book I'm reading next, too, Bateman's Mystery Man--but I suspect Bateman will be using them in a not entirely straightforward fashion. Fesperman's Nazi hunter/historian is propelled by the arrest of his former mentor into a rat's nest of police, FBI, and spies and ultimately into the intimate past lives of that mentor and a crowd of Germans and Swiss whom he encountered in wartime Bern. The flashbacks deal with a German mini-Krupp industrialist who manufactured war materiel for the Nazis and for all comers after the war (along with coffee makers): his youth and bad choices during the height of the war are the engine that drives the plot and the historian's search. The reasons given as to why anyone would care anymore about the industrialist's past are plausible but not really developed (why flesh out the Iranians, the Pakistanis, and the nuclear weapons parts when there are Nazis to be pursued, right?). The novel was pretty good, in spite of my frustrations with it--I was propelled along to the finish. And it makes me want to go back to Fesperman's Sarajevo detective (in Lies in the Dark and Small Boat of Great Sorrows) as well his excursions into other parts of the world in a couple of more recent novels--to see whether my jaded attitude toward WWII plots is getting in the way of an appreciation for this obviously gifted and well-informed novelist.
Posted by Glenn Harper at 8:07 PM