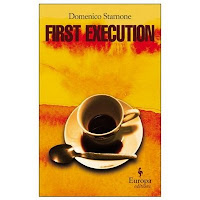 The books being published by Europa editions are seductive enough as book-objects that they hardly need the highest quality of writing and translation--but they have that too. The books are often less than 200 pages, printed with an untrimmed edge, and in a tall, elegant format with gorgeous paperback covers. They have published a number of excellent crime novels in translation, by Massimo Carlotto, Alicia Gimenez-Bartlett, Jean-Claude Izzo, and Carlo Lucarelli, among others, alongside first-rate contemporary fiction that would otherwise not be available in English. First Execution, by Domenico Starnone and translated by Antony Shugaar, could fit in either category. It's about the roots of violent revolutionary ideology in post-War Italy, and includes crimes of various sorts (seen and implied) including assault and assasination. But it's told in a two-part (really four-part) metafictional style that is always lucid and entertaining. We meet a retired professor, Domenico Stasi, who has been approached by a former female student, Nina Villa, who has been accused of complicity with a revived Red Brigades terrorist group. Nina asks Stasi to perform an errand that seems to be related to her terrorist connections. Then we meet (spoiler alert) the writer who is trying to write the story of Stasi and struggling with his material. So there is Stasi's first-person narrative, a third-person narrative about Stasi, and twin first-person narratives by the writer about the text and about incidents in his own life (and actually there is yet another thread at the end (several of which become intertwined with the tale of Stasi). But don't be put off by the complexity: Starnone is in perfect control, and the reader moves seamlessly from one thread of the story into another with no confusion. The writing is gorgeous: one passage as a simple example, when a man is assaulted and tries to run away from his assailant: "he was gathering himself together--collecting himself--with all his strength and then splintering himself away heavily, now a leg, now an arm, now the head. It was a weird, off-kilter flight: he hastened away, but uncomfortably, uneasily." That passage could be from a Futurist classic or from Carlo Emilio Gadda's famously complex detective story, That Awful Mess on Via Merulana, a masterpiece of Modernist Italian fiction. There's also a bit of Luigi Pirandello and a bit of Italo Svevo in Starnone's style. But Starnone's prose remains, for all its flash, disarmingly direct, never difficult. Through Stasi's meditations on what he has taught his students, on his own motivations and convictions, and on the options for direct action that he now confronts we delve deeply into the distinctive left-wing politics of the "old Europe" and on the distinctive brand of violent opposition also appearing therein. The voices in the novel give us the whole pattern of Italian politics, the division of rich and poor, the frustration and the temptation toward violent resistance, the corruption and organized crime, the unemployment that confronts university graduates, and the global situation of the 21st century, in a fast-moving, lively, interwoven story. Starnone doesn't come to a resolution of the philosophical and political conundrums that he raises: instead he gives us a view of the realities and motives underlying Italian politics, giving no one a free ride in his cold-blooded (or perhaps hard-boiled) depiction. Starnone portrays the philosophical underpinnings for the host of novels and films depicting politics in modern Italy--and he does it in with entertaining, Postmodern panache.
Posted by Glenn Harper at 9:28 AM

That was a bold but accurate statement about Europa volumes' attractiveness as objects. I'm with you in lavish praise for their editions of Carlo Lucarelli nad Jean-Claude Izzo, though I'm less certain about Alicia Gimenez Bartlett.

I once complained about imprecise, clunky language in one of her books, and I wondered whether the fault lay with the author or with the translator. A commenter on my blog, who apparently knew the work of both, suggested the problem was Gimenez Bartlett.
==============
Detectives Beyond Borders
"Because Murder Is More Fun Away From Home"
http://www.detectivesbeyondborders.blogspot.com

Peter: I know what you mean about Gimenez-Bartlett's language--but I find it appropriate, in its own way, to the off-center quality of her characters and her plots. She's not really that interested, for instance, in the crime or mystery--she's more interested in the relationships among the characters (something that's easier to get into now that we can read the books in order, though they were published out of order). Actually I find Henning Mankell's language clunky as well (and some Swedish readers of his work have told me it's at least as much that way in the original, perhaps more so). But the stiffness of the language suits the plodding quality of the stories in an odd way, adding up to something other than clumsiness, maybe language reinforcing the dailiness of the stories. Just a thought.
Thanks,
Glenn

And a thought-provoking thought it is. I wrote about the Gimenez-Bartlett translation here. My complaints included vague language. I raised the possiility that what seems vague to an English reader might not raise a Spanish eyebrow. If that's the case, what is a translator to do?
==============
Detectives Beyond Borders
"Because Murder Is More Fun Away From Home"
http://www.detectivesbeyondborders.blogspot.com