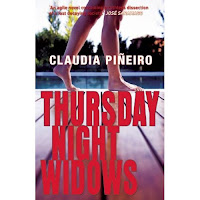 Claujdia Piñeiro's Thursday Night Widows (from Bitter Lemon Press, translated by Miranda France) portrays a gated community outside Buenos Aires that is a kind of Potemkin village, except that here it's not the buildings that are false façades but the people. The surface of the novel is the surface of the characters' lives, and what lies behind (Argentinian politics, the collapse of the economy, the prejudice of Euro-Argentinians against indigenous people and the lower classes, the lies and disturbances within the families, and domestic violence of the physical and emotional variety) is mostly implied between the lines rather than directly portrayed. The novel is told in chapters from a number of characters points of view (the wives whose husbands play cards on Thursday nights, hence the title, but also the maids, husbands, a few of the children), creating a kaleidoscopic portrait of a middle class haven and hell. The novel begins with fear and death in 2001, just after 9/11, and then backtracks through several families' arrival in Cascade Heights, a "Desperate Housewives" neighborhood determined to isolate itself from society's threats. Despite the violence of the beginning, and the threat that a number of characters feel from one of the husbands (El Tano Scaglia), this is not a conventional crime novel, and not a thriller (the story is episodic rather than concentrated on a single thriller plotline). It's satire, but not cold or bloodless: the characters are too vivid and their misery (and the misery they inflict on others) too real. Piñeiro is performing an autopsy on a group that attempts to isolate itself from any threat or responsibility from or toward the rest of the culture and society, creating a vivid portrait of the gated community and the wider social fabric. The "daily," ordinary quality of the narrative and the pretentious middle-class characters didn't grab me at first, but Piñeiro soon pulled me in through the satirical approach to the characters (as well as a few more sympathetic characters, particularly two of the children), through the hints of what is going on behind the façades, and through startling vignettes like a series of "altars" created in one of the homes by one of the wives after she abandons the gated lifestyle for something more honest, primitive, and more openly vindictive. The ending leaves a resolution hanging in the balance as the one woman who addresses the reader in her own voice drives away from the community with her family on a mission that might destroy at least some of the artificiality and dissimulation that has gone on inside the gates.
Posted by Glenn Harper at 7:25 AM

I've just read this. It's great! Have you read The Unit by Ninni Holmquist? A different take on the same kind of theme - fantastic I think. (translated by Marlene Delargy)

Thanks for the suggestion--I hadn't paid much attention to Holmquist's book since it came out but will look for it now. I had mentally lumped it in with the classic Swedish dystopian novel, Karin Boye's Kallocain (which was translated into English in the 60s, I think, and has been in print intermittently. Kallocain is something like Zamyatin, Orwell, or Huxley--but now that I'm paying attention, The Unit sounds a bit different from that sort of thing.