The Fugitive, by Massimo Carlotto 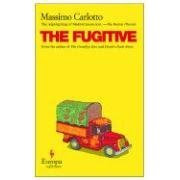 Massimo Carlotto's The Fugitive was published as a novel (in Italian, 1994, in English translation by Antony Shugaar and Europa Editions) in 2007; but it's not really a novel--it might once have been called a "confessional novel" or a memoir lightly disguised as a novel. It's organized thematically rather than as a linear plot. Carlotto provides a guidebook to being on the run, as well as anecdotes from his life as a prisoner and as a fugitive from the Italian government, and a memoir of several aspects of his life in that period (such as binge eating). The short chapters focus on the Mexican revolutionary circles that sheltered him (and betrayed him), on creating new identities while living in Paris, on the difficulties of maintaining a sexual relationship or finding new ones while on the run, and so forth--told in a hybrid form that has aspects of the essay and the novel (considerable discussion of the fugitive life along with narrative sections on his particular experience). The book is book-ended with an introduction by the author, giving a few details of the "Carlotto case," two short chapters about his experience on his forced return to Italy, and a publisher's note at the end, giving a timeline of the case as it worked slowly through the Italian legal system and through the protest movements and ultimate pardon by the State. The story is fascinating, though the reason for his original arrest is never made clear (the case is abundantly discussed elsewhere, so he perhaps felt no need to return to that aspect of it). But the narrative is more static, more like an essay, than Carlotto's fiction (which is typically dark, fast-moving, and linear). The Fugitive is dark enough but more a political discussion than a crime novel (the major crime being the workings of the Italian legal system and the cruelties of a chaotic Mexican situation). I'd say that anyone who has read Carlotto's other books or is familiar with his life will be fascinated by The Fugitive, and it provides an interesting background to at least two of the other novel (Death's Dark Abyss and The Goodbye Kiss). It's also essential reading for anyone interested in the Italian period of "troubles" or the legal system there. But the reader of crime fiction should start with his unconventional detective novels (featuring "Alligator" and his friends) or the more straightforward noir fiction of his other novels. The Fugitive has a great cover--another excellent book design by Europa.
Posted by Glenn Harper at 9:09 AM