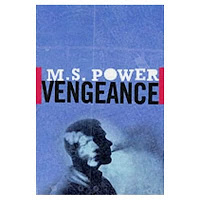 M.S. Power's 2002 novel, Vengeance, is an adaptation of the serial killer genre in which the serial killer is to a certain extent left behind. The novel has three threads: Chief Inspector Robert Harvey (in London) is, at the beginning, confronted with the 4th in a string of murderous attacks on "rent boys," whose bodies are found naked, with their throats cut. His investigation proceeds by fits and starts, in a fairly conventional police-procedural manner, with some time devoted to Harvey's family (wife Helen and 17-year old son Justin). The second thread is from the point of view of the serial killer, who thinks he's "saving" the boys from their sin, and has frequent flashbacks to his brutalized youth in a Catholic orphanage. The third thread deals with Harvey's twin sons, only slightly older than Justin, whom he's never met--he tried to convince their mother to have an abortion but she refused and cut off all contact with him. The twins (a continuation of Power's exploration of murderous children) have found out who their father is, and that he wanted to abort them. The relationship of the twins, and their plot to get revenge on Harvey, takes over the novel as it progresses, to the point that the serial killer is at one point himself puzzled at being passed over, unable to achieve his moment of recognition and repentance. At another point, one of the characters refers to something he's read "in a book" about the pleasure of killing--the sly reference is to Power's own Stalker's Apprentice, reviewed here recently. Vengeance has some of the same claustrophobic narrative as that novel, when the focus is on the twins, but with a menace that is further developed here through the twins' conversation with each other. Though not identical twins, the boys have the empathy with each other that twins are reported to have, but in this case with quite different personalities. The development of their plan (as well as its execution) is chilling for its ordinary, even childish, quality. Ultimately the story is more about families, and family loyalties, than murder and detection. But the story pulls the reader along to a conclusion that defies the conventions of the mystery/serial killer/crime genres, drawing closer to certain kinds of psychological thrillers (from Patricia Highsmith to Ruth Rendell, to mention just two). Vengeance is more compelling than Power's other novels that hew more or less to crime fiction conventions (Stalker and its sequel, Dealing with Kranze, plus Nathan Crosby's Fan Mail) but doesn't reach for the weird-and-yet-convincing achievement of his trilogy of the Troubles, Children of the North (which I keep bringing up here in order to keep its memory alive, since the trilogy is out of print).
Posted by Glenn Harper at 9:29 AM