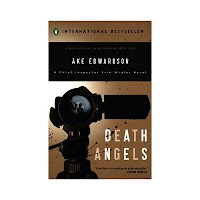 Death Angels is the translation of the first of Åke Edwardson's Erik Winter novels, only now arriving in English (rather like the late appearances, recently, of the first of Fred Vargas's Adamsberg or the first of Håkan Nesser's Van Veeteren, and in this first outing Winter has something in common with both). The style of the writing (and/or the translation by Ken Schubert) is a bit difficult, alternately elliptical and explicit information, rather like Winter's own complaint (regarding the police reports he's been reading) of "William Faulkner one minute, Mickey Spillane the next." Edwardson spends a lot of time establishing the social context of the crime and the police (in both Sweden and England, and that tendency plus the somewhat difficult style result in an oddly static story for the first two-thirds of the book (but then, Edwardson writes pure police procedurals, which tend to have long unproductive segments in their investigations). Winter is here a loner, not yet the married man of the later books, but already a dandy and a somewhat pretentious jazz fancier, to the point of not recognizing a reference to The Clash by the English Inspector Macdonald, with whom Winter is cooperating in his investigation of a series of murders in London and Göteborg that suggest the making of snuff films. Snuff films were a few years ago (perhaps about the time this novel was originally published, under a Swedish title that actually translates as Dance with an Angel) quite the cliche of crime fiction (most particularly crime movies) but are less so now--perhaps in recognition of a general feeling that snuff films are an urban myth. One of Winter's detectives gets over his head in an investigation of strip clubs another (and continuing) staple of crime fiction (and movies). Once the momentum crests and the reader thinks everything's figured out, there are a still a couple of surprises in store. Though it seems to take a while getting started, Death Angels is a good foundation for a series that has since then gotten better and better.
Posted by Glenn Harper at 5:08 PM

Have you read this book in Swedish or in the apparently atrocious English translation.Sadly, far too many Scandinavian crime novels have been translated by those whose mother tongue is not English, and in many instances produces odd, or even comic, effects.

Sadly, my Swedish isn't up to reading a whole novel (and was really never that good, despite studying the language in the '70s and learning "kitchen Swedish" from my Swedish grandmother in the '50s.