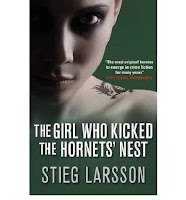 The Girl Who Kicked the Hornets Nest announces to the reader through references to Jan Guillou, popular Swedish author of spy novels, few of which have been translated into English, that the genre that will be dominant in this third volume of Stieg Larsson's trilogy is the spy novel (as the detective/mystery was for the first volume and the thriller/revenge tale for the second). Life has intervened to slow down my reading schedule, so I'm only just over a quarter of the way through Millennium III, but I have a couple of observations and questions (an surely a book this long can support more than one blog post). Many writers will compose a lot of detail about the background of their characters and their plots as part of planning a book or as a first draft. Many of those writers delete the extensive background information in the final draft, allowing inference in the finished text to fill in the picture. Stieg Larsson didn't do that, possibly because of his untimely death, and the books are chock full of that kind of background info--to the extent that The Girl Who Kicked the Hornets' Nest seems to actually get going on page 160 (out of 600, and possibly accounting for the overall length to some extent). Another reviewer said that Larsson fills in so much background because he's writing more as a journalist than a novelist, and on the other hand, a lot of bestsellers (including those of mediocre or worse quality, as opposed to the Millennium trilogy, which has at least some merit as a story, according to most reviewers including myself) also fill in a lot of background, giving more information than most crime novels of the first rank in terms of being well-written. Is there something about the oversupply of information that helps make a bestseller? Is anyone else bothered by the extensive detail of the first 160 pages of TGWKTHN? Do those fortunate enough to have already finished the book have any opinion as to the lost opportunity to perhaps improve the book (and its prequels) by some careful but extensive editing? Or is part of the appeal of this particular story its effort to fill in all the details about what's going on, what has gone in the past, etc., regarding so many of its characters? For me, what saves the book from the dismal quality of so many bestsellers (such as one currently at the top of the lists) is that Larsson does actually have something to say about the real world (which goes back to his backround as a journalist as well as to the Swedish tradition of crime fiction).
Posted by Glenn Harper at 9:39 AM

It's fascinating, isn't it? Usually, I would be so annoyed by that first 160 pages (and the first 200 pages of GWPWF). And certainly the first 160 pages of "Hornet's" are a challenge to those who read "Fire" some months ago, as you have to have retained a lot of details.
But somehow, although there is a rawness to the style of these books, they pull you in. I was dreading the end of "Hornet's" while being aware of its flaws and "rough and ready" quality, I was also totally sucked in, and admiring of the guiding intelligence behind the plot.

I think that as the author planned ten books, he put various sections into the first three novels (which do form a sort of self-contained trilogy) so that he could pick them up and develop them later.

There is something a bit special about these books - although I don't like marketing hype and so on, they do have this amazing pace (even though they don't describe particularly thrilling events most of the time) and ability to make you read them constantly until you have finished. My husband, who usually reads very heavy non-fiction history etc, just read GWTDT, and once started, he just could not put it down. He even read it on the train instead of doing his work, unprecedented!

I agree with your take that each book in this trilogy was consciously a crime-fiction "theme". Sjowall and Wahloo's books used a similar technique, and I think Stieg Larsson has copied this ten-book plan (or intended to).

I certainly think that Hornets' Nest could have done with some editing in the early pages and it wouldn't have hurt the book too much. In the end though I came to the conclusion that the ludicrous amounts of detail are something you have to accept with Larsson's work - it just goes with the territory and you either have to deal with it or read something else.