The Consorts of Death: latest Varg Veum in English by Gunnar Staalesen 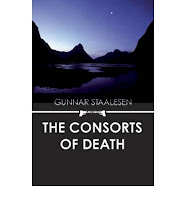 The fourth Varg Veum novel by Norway's Gunnar Staalesen, The Consorts of Death, was recently released in English translation by Don Bartlett (published in the Euro Crime series by Arcadia Books in the U.K.). The novel has a complex time-line, beginning in the present day (it was originally published in Norway in 2006), skipping back to the 1970s as Varg, then in his child-welfare career post, encounters a neglected boy that everyone calls Johnny Boy; then we move forward to the 1980s as Johnny Boy, now a teenager, is suspected of murdering his foster parents and asks to speak to Varg (by now a private detective) in the middle of what seems to be a hostage crisis; then we move back to the present when Johnny Boy, a bitter man just out of prison, has Varg on his hit list. Along the way, we also get a glimpse of a murder case from the mid-19th century that has resonances with the 20th and 21st century events. The whole pattern investigates the difficulties that some kids have with the child welfare system (and with their original parents), as well as Varg's attempts to (not very succesfully) help Johnny Boy. Most of the action is away from Varg's usual territory in Bergen: the pages set in the 80s are mostly in the hill and lake district outside Bergen, and the present-day passages are more in Oslo than Bergen. There are some eloquent passages when Varg meditates on his and the system's failures, and the story is mostly carried forward in Varg's personable first-person voice. Staalesen shows great skill in keeping a very complex story coherent: characters and events weave in and out, with personal and metaphorical connections among them all along the way. There are some surpises at the end, as well, when Varg finally discovers what's been going on in the several murders and in Johnny Boy's life. Staalesen's novels take on social issues, but there are many passages in this book that are right out of classic noir (though Varg isn't the usual noir hero, he has too much hope for his clients' fates). There's a lot more Varg Veum in Norwegian, and I for one hope for translators and publishers to fill in the gaps in what has been translated. In the meantime, we have the Varg Veum TV series from Norway (and there's an episode waiting for me that I'll be reporting on soon).
Posted by Glenn Harper at 9:38 AM

I loved this book (reviewed it for Euro Crime), and I am sure it benefitted from being translated by the supreme Don Bartlett. Apparently, says Karen of Euro Crime, more Staalesens are on the way via Arcadia. I have read a couple of the earlier ones, in old library reject editions, and enjoyed them very much.