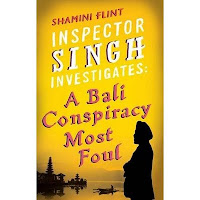 The 2nd Inspector Singh novel to be published by Piatkus Press (and the third overall) is more confident and accomplished than the earlier stories. Singh is a more rounded character (he was pretty one-dimensional in the first of the novels, which is apparently to be reissued in the "Inspector Singh Investigates" series as The Singapore School of Villainy, though its original title was Partners in Crime). The plot of the Bali novel is layered: one crime conceals another, which we ultimately find conceals another still. After the Bali bombing (the real one that we all know about), Singh is sent to Bali to give assistance (along with a number of Australian police, who have a more obvious reason to be there). When a piece of a corpse's head is discovered among the dead with a bullet hole in it, Singh (with no expertise in terrorism) is asked to investigate the solo murder buried beneath the mass murder. With the assistance of an Australian cop that is similarly not involved in the main investigation of the bombing, Singh maneuvers among a group of emigre Anglos and a small Indonesian Muslim group, whose stories Flint tells as an omniscient narrator, as well as showing them through Singh's eyes. The novel is quite involving, especially for the first half. As the mystery becomes more clear, there is a bit less momentum for a while, but at the end the novel shifts into thriller-gear and moves along quite quickly. Some of the characters, cops, emigres, and terrorists, seem curiously naive, and there remain some elements of the romance novel, as in the earlier books in the series, but overall "A Bali Conspiracy" is effective in dealing with a terror incident at arms length, through the structure of a detective novel, and the rising quality of the series raises expectations for later books, perhaps returning to Singapore and perhaps continuing the crime tour of Southeast Asia.
Posted by Glenn Harper at 2:40 PM

Loved the review and very interested to see that you are one of the few people who read Inspector Singh in his original incarnation in 'Partners in Crime'. That was my self-published effort before being (happily) swallowed up by the international publishing machinery. Yes, the book has been substantially re-written at the behest of Little, Brown (a truly exhausting process - half way through I realised it would have been easier to write a fresh book!). Would love to hear your thoughts on the revised version. Let me know (at shamini@shaminiflint.com) if I can send you a copy.