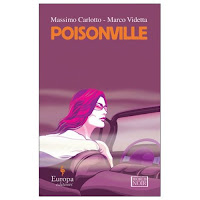 Massimo Carolotto is a leading Italian crime writer, known in the English speaking world for crime novels and semi-fictional narratives about his own experience as a fugitive from the Italian justice system. Marco Videtta is a well-known Italian screenwriter. They've collaborated on a novel, Nordest, translated by Anthony Shugaar as Poisonville, that is as much a bleak satire as a crime novel. The Italian title refers to the industrialized Northeast region of Italy, controlled for many years by a few families not of the Mafia sort (thought there is cerainly that presence in the Northeast as well), but of the wealthy and aristocratic sort, who control all aspects of life including the justice system (according to this novel at least). The story is told partly in the first-person by Francesco, whose fiancee, Giovanna, is murdered at the beginning, and partly by a third-person narrator who gives us the points of view of a motley group of other characters, including aristocrats, middle-class young people, and thugs. There is a bit of authorial sleight of hand at the beginning, obscuring the identity of the murderer, though readers will probably figure out by the middle of the book who the real murderer is (long before Francesco or the one policeman who is interested in the truth). According to Francesco himself, "Giovanna's murder had become the setting for a story abounding in savory plot twists, turns, and surprises," describing the media response to the event but also aptly describing the novel itself. Along the way, the leading families are implicated in an earlier murder and fraud aimed toward controlling a landowner's assets, the illegal dumping of toxic waste from factories (the literal source of the English title), and the rotten core of the region's social structure--the targets of the satirical pens of the authors. Bleakly funny, the tone is noir or satirical more than conventional crime novel, and it's difficult to care much about what happens to any of the characters, including Francesco. But it's a fascinating portrait of contemporary Italy, and further evidence of the multifaceted skills of Carlotto, whose solo works are quite different, and of the skill of his collaborator.
Posted by Glenn Harper at 12:43 PM

I've just read this and loved it. I want to read more by Carlotto as a result, but I'm a bit concerned by your comment that his other books are not like this one.

Maxine: Of the translated books by Carlotto, a couple are about an underworld private detective named "Alligator", definitely hard-boiled noir, and a couple are noir-ish stories of revenge relating to Carlotto's own history as a fugitive. And one is an essay-like story about how to survive in exile (or at least how he managed to, by the skin of his teeth).