Affairs of State, by Dominique Manotti 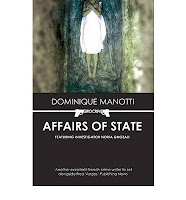 Dominique Manotti sets each of her crime novels in a particular historical milieu of late-20th-century France (she is, after all, a professor of economic history), and the most recent novel to be translated into English (by Amanda Hopkinson and Ros Schwartz), Affairs of State, is set in 1985 and deals with the political and social conditions of the late Mittérand administration. The main characters (among a large cast) are Noria Ghozali, a North African female cop (doubly unwelcome by other officers) and François Bornand, a pro-American leftist who is a behind-the-scenes advisor to the president. The plot (far too complicated, or perhaps intricate is the word, to summarize here) deals with the international arms trade (specifically involving Iran, under an embargo at the time because of the Iran-Iraq war), a high-end brothel, competition among police and intelligence services, murder (deliberate and accidental), and the impossibility of prosecuting certain people for crimes ranging from prostitution to murder (because of their political influence). This is the first of Manotti's translated novels to feature a woman in a leading role, but the blurb on the cover, "Featuring Investigator Noria Ghozali," is a bit misleading--Noria is a constant thread through the story but there is really no single "main character" much less hero. 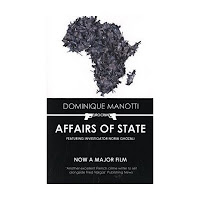 Noria, however, is the one character who learns from the sleazy process of politics, crime, and investigation--I don't know if there's a series based on her, but it wold be a strong counterpart to Manotti's series featuring Daquin, a sometimes brutal cop who is none too straight in terms of his sexuality or his police methods (though Daquin is more of a central character in those books). Affairs of State is very French, but also resonates with dirty politics and specific historical circumstances (trade with Iran also featuring in Reagan-era U.S. politics in complex and not very savory ways). It's a terse, short book with few sympathetic characters and with sudden changes of direction and no simple or pat conclusion. And it's one of the best crime novels to appear in 2009 (though my copy didn't arrive until a few days before 2010). Manotti demonstrates how a crime novel can effectively incorporate social events and political realities without sacrificing the story, as well as how a noir story can deeply investigate social circumstances. Arcadia, the publisher of the EuroCrime series in which Affairs of State appears, seems to be changing its covers at the last minute these days. The two that appear here are the one on the copy I received (the map of Africa composed of guns) and the one advertised (the one showing a woman who appears to be a corpse). I would have preferred the one advertised, I think, for its restrained color (the African map is black and white) and its oblique relation to the events of the story (Africa is even more oblique, but definitely involved).
Posted by Glenn Harper at 12:09 PM

I've just finished this (black and white map cover version!). I enjoyed it a lot - the first half more than the second, though.

How about the gritty West African Bruce Medway series by Robert Wilson. Set along that stretch of coast once known as "The White Man's Grave" (Cote d'Ivoire east to Nigeria with the main character based out of Cotonou, Benin).
1. Instruments of Darkness
2. The Big Killing
3. Blood is Dirt
4. A Darkening Stain
All are very realistic down to descriptions of just how much one sweats there. I should know having made some fast bucks trading cocoa between coups there myself.

For Africa you might also try the recently published first volume of a new series set in Cairo: "The Golden Scales: A Makana Mystery" by a chap named Parker Bilal

The ancient city of Cairo is a feverish tangle of the old and the new, of the superrich and the desperately poor, with inequality and corruption everywhere. It's a place where grudges and long-buried secrets can fester, and where people can disappear in the blink of an eye.

Makana, a former Sudanese police inspector forced to flee to Cairo, is now struggling to make ends meet as a private detective. In need of money, he takes a case from the notoriously corrupt mogul Saad Hanafi, owner of a Cairo soccer team, whose star player, Adil Romario, has gone missing. Soon, Makana is caught up in a mystery that takes him into the treacherous underbelly of his adopted city, encountering Muslim extremists, Russian gangsters, vengeful women, and a desperate mother hunting for her missing daughter-a trail that leads him back into his own story, stirring up painful personal memories and bringing him face-to-face with an old enemy from his past …

Using a Sudanese refugee former police inspector is interesting. Should give an interesting look into the lives of the black underclass living in Arab cities north of the Sahara. Come to think of it tension filled Khartoum would make a good setting for noir