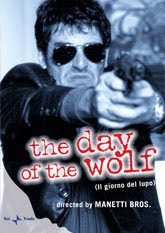 MhZ Networks in the U.S. ran the first in a series of Italian police dramas drawn from an untranslated novel (Day of the Wolf) by Carlo Lucarelli, author of the very different De Luca and Ispettore Negro novels that have been translated into English. Coliandro is very different from either, it's a tongue-in-cheek TV comedy-drama about a young cop who thinks he's a super cop when in fact he's an inveterate screwup (in the first story, he's been demoted to running the supply room after arresting an undercover Carabinieri). The parody in the series can be seen even in the attached poster for the "pilot" episode's mannerism. In looking for info on Coliandro on-line, I discovered that there's also an RAI (Italian TV) series based on Lucarelli's De Luca novels (which follow a detective during and after the fall of the Fascist regime at the end of World War II). The "Chief Detective De Luca" series is a prequel, at least in the beginning, following De Luca's career as a cop in prewar Bologna, before the events of the trilogy (now a tetralogy in Italian, I think) of De Luca novels. The series website states that its period is 1938-48, which means that it will eventually catch up to the published novels. While the Coliandro series is amusing, and it's interesting to see Bologna from a cop's perspective (a TV cop anyway), it would be great to have an opportunity to see the De Luca series, which is a very good story as written in the novels.
Posted by Glenn Harper at 9:42 AM

I do hope the other De Luca books get translated and it would be fun to see the TV series (even if I can't understand it!). I have a PhD student about to do fieldwork in Italy; I might see if she can get me a copy.