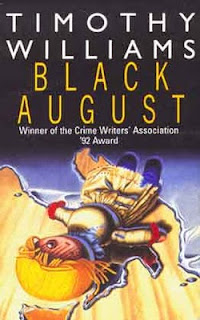 I've been working my way through the overlooked Commissario Trotti series by Timothy Williams, and this week I'm only going to give some highlights of Black August, the 4th novel in the series, which holds up the high standard that the author set in the first 3.

this one zeroes in even more closely on the irritable Trotti himself. Evidence of a possible suicide by drowning have appeared, and then an old friend of Trotti's (from the first novel) is discovered murdered in her apartment. Trotti's daughter, Pioppi, is expecting her first child (in Bologna) and the detective is anxiously awaiting news. He's warned off the murder investigation (since he's not part of the new Murder Squad) but continues to pursue it in his own way, giving evidence of why the Questore (sort of a police chief) doesn't trust him.

Trotti rides roughshod over his assistants, other cops, witnesses, and informants—getting to the truth but at considerable cost. Black August takes Williams's investigation of this difficult character to new levels. The city (more or less Pavia) is evoked in detail, and some of Italy's ongoing social problems (in particular immigration and the lack of facilities to care for the mentally ill) are a major focus.

If you haven't discovered the Trotti books, and if you're willing to do some work (Williams doesn't spoon-feed readers, and a lot of the dialogue is indirect in an interesting but oblique manner), all of them are highly recommended (if you can find them). Crime fiction publishers are missing a bet by not picking up the series (especially since Williams says that a sixth, unpublished novel is finished).
Posted by Glenn Harper at 3:28 PM

I apologize for raising the subject this way, but I have searched in vain for some other way to contact you directly to introduce you to my own Asian-set crime novels published by Marshall Cavendish in Singapore and distributed only in Asia and Australia/NZ. You may reach me thorough www.JakeNeedham.com if you are inclined to hear more. And again, my apologies for the abuse of this forum to reach you.

I wonder what percentage of detectives would be classified as irritable. Almost all of them, I wager.

I haven't read any of these, but I have to wonder how they compare to Donna Leon's novels set in Italy and featuring Commissario Guido Brunetti? At any rate, I hope Williams is able to get that MS published.

Commissario Trotti's world is considerably darker than Commissario Brunetti's: for one thing, Trotti's wife has left him, and his daughter has moved away from the city. So Trotti is alone, and he's also more manipulative in his use of his assistants, even the competent ones. Brunetti is in some ways an ideal, whereas Trotti is a flawed individual, his flaws ultimately affecting his work. And though the conversations and the unfolding of the plot in Brunetti's stories can be indirect and allusive, Trotti's stories are told in an even more indirect style, with speakers talking past one another and events taking sudden (often offstage) turns.

Another new one on me.