From Ghana: Kwei Quartey's Wife of the Gods 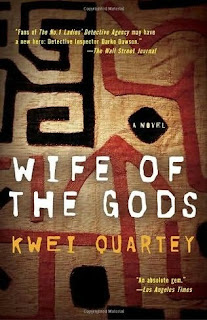 Kwei Quartey's Wife of the Gods has a lot to recommend it. Darko Dawson is a
detective in Accra, the capital of Ghana. He's sent to a small town where an
AIDS volunteer and medical student has been killed—the same town where his
mother's sister lives and where his mother disappeared without a trace years
before.

There's a lot of local color in the language, the setting, and the action, which
concerns several traditional healers and a general belief in spells and witches,
as well as common ordinary adultery and crime. There are also striking elements
to the story, in particular the portraits of crimes against women (enslavement,
rape, the very provocatively evoked "wives of the gods," and more).

I suppose my impression of the novel is colored somewhat by the books I've been
recently reading, which have been carefully but obliquely constructed, leaving
much more than the identity of the killer for the reader to figure out.
Quartey's novel makes it much easier for the reader: in that way it's more of a
cozy, though there's certainly nothing cozy about the outlines of the story.
Darko several times exhibits rash and violent behavior such as isn't found in
the usual cozy, as well.

But the good guys and the bad guys (including cops) are mostly clearly
separated, with shades of gray only in a few characters, including Darko
himself. Several nasty characters (particularly a cop and a fetish priest) are
caricatures of destructive behavior. An interesting dilemma is raised, regarding the urge to preserve indigenous traditions while at the same time providing effective medical care, but the indigenous medical practitioners are not given much respect here (and Quartey is a better judge than I as to whether they deserve any, as he is both a doctor and a native of Ghana). 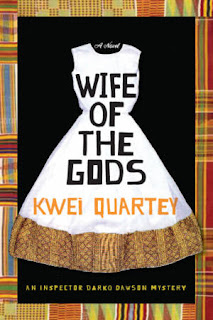 Family is a big part of the story. Darko is happily married but his son is ill,
having been born with a heart defect. His mother-in-law takes the boy to a
traditional healer, against the boy's parents wishes and with bad results. The
detective is personally drawn into the story not only by that event but also by
the fate of his mother and by the reunion with his aunt during the murder case.

The spectrum of current African crime fiction (mostly from South Africa, though there's a promising new Nigerian book, Adimchinma Ibe's Treachery in the Yard, that I haven't gotten hold of yet) runs from Alexander McCall Smith at the cozy end to "Michael Stanley," and, increasingly noir, to Jassy Mackenzie, Deon Meyer, and Roger Smith. Quartey's story falls somewhere between Smith and Stanley, dealing with terrible and dark events but in terms of family and ordinary human motivations (rather than extreme situations and emotions, however common those may be in a violent society).

A noir novel could certainly have been written (not to mention a lurid one) from the materials that Quartey assembles, but perhaps the crimes against women and the anti-modern religious atmosphere are more clearly evoked against the quotidian background that Wife of the Gods provides. One interestign fact-let: the cover used on at least the hardback of the U.S. edition uses a kinte-cloth pattern, rather than the symbolic pattern that actually plays a part in the story, while a cover that I see on-line (the first one shown above) uses a more appropriate pattern (but I can't find anywhere that the book has so far been published with that cover).
Posted by Glenn Harper at 9:38 AM

Thanks for your excellent review Glenn. I spotted this book recently and I'm glad you recommend it.

I reviewed Kwei Quartey's WIFE OF THE GODS on Murder by Type. I thought it was a well told story.

Please go to www.kweiquartey.com and click on "Kwei's blogs". "Latest news" will take you to Kwei's hilarious, "The Girl Who Kicked The Termite Hill." He offers some suggestions to readers who have bought Stieg Larsson's books. Kwei suggests that he and Larsson have a lot in common.

Nice review Glenn - I've just finished the book and am still muddling through my thoughts on it. I agree that it's somewhere in between cosy and not which makes it a more difficult one to process for some reason.

Thanks for your review, Glenn. I'll be interested to see what you think of my upcoming Darko Dawson novel CHILDREN OF THE STREET (release date July 12,2011 - I know, seems a long time). I think there are some stylistic differences between it and the first one, but I won't prejudice you with my own view.