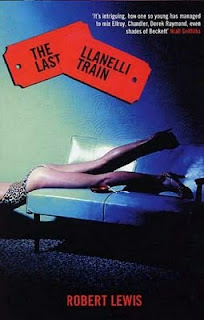 On the occasion of the arrival in the U.S. of the new Robin Llewellyn book by Welsh writer Robert Lewis (Bank of the Black Sheep), I thought I'd say a few words about the first book in the series, The Last Llanelli Train, about which I haven't seen much discussion in the blogosphere (all of them have been published by Serpent's Tail). The Llewellyn books are a saga that marries the noir of Jim Thompson to the bohemian depths of down-and-out writing from Knut Hamsun's Hunger to Charles Bukowski to Irvine Welsh: but Lewis's writing is funnier than Hamsun's (which doesn't say much, but there's indeed a lot of very dark humor in the Llewellyn stories) and the books have more in common with Welsh than Bukowski. And each volume is remarkable for a fact that Lewis shares with at least one other writer, Argentina's Ernesto Mallo: at the end of the first book, the first-person narrator and hero has fallen so far that it's hard to imagine the possibility of a sequel (and at the end of the second book, Swansea Terminal, it's impossible to imagine—lending an additional temptation to see how Lewis manages the third book). A character tells the detective, "you're not going to sink any deeper than you are already I simply can't believe that's possible." Lewis seems to take the comments as a challenge.

Llewellyn (pronounced as "Lou-Ellen" by several people he meets) is a private detective in Bristol whose alcoholism occupies more of his life than his job (the later books will take him back to Wales, where he's from). Locked out of his apartment after a typical day's binge, and attempting to sleep it off in his office, he gets a phone call from a woman who wants him to entrap her husband into a sexual encounter to give her ammunition for a divorce. The price he asks for the job is matched by her demands for video documentation, and the entrapment proceeds slowly through successive drinking bouts, encounters with people to whom he owes money, and intermittent attempts to find a suitable prostitute and the equipment necessary for the job.

The plot twists several times in the last half of the book, not least in revelations about Llewellyn's past (details of which are more pertinent to subsequent novels). Who the woman who hired him turns out to be, who's really paying the bills, and what the plot is all about lead up to a conclusion that's satisfying in its unconventional approach to the genre. None of the Llewellyn books are for the faint of heart, though the darkness is leavened by the humor of a character who seems to have nothing left to lose, and then loses more (which is why, I guess, the books have been aptly compared to Beckett).
Posted by Glenn Harper at 11:22 AM

Now this sounds very good indeed. I was quite a fan of Knut Hamsen once upon a time.