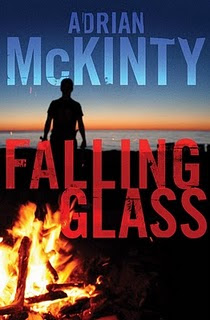 Adrian McKinty's newest thriller is (in part) the return of Michael Forsythe, the central character in the trilogy that made him famous. Only in part, though, since Forsythe is mostly off-stage. The central character here is a minor character from the trilogy, known mostly as Killian. What Falling Glass has in common with the trilogy is a relentless pace and overarching metaphorical resonance—but Falling Glass is a better book, the best of anything I've read by McKinty so far. The setting is mostly Northern Ireland, and mostly countryside rather than city, though at the beginning the story moves across a lot of global geography.

The situation is that Killian is hired by an Irish airline magnate (sort of Richard Branson on a smaller scale) whose ex-wife has disappeared with their two daughters. Killian is simply asked to find them. The situation gets a lot more complicated when the magnate finds out that something else is missing, and several other characters get dropped menacingly into the mix, including a Russian hitman, a ruthless fixer, and the ex-wife herself.

One of the main threads in the novel is the culture of the traveler community in Ireland and beyond, a culture little known beyond its closely guarded circle of families. The reader will learn a lot about the travelers (known by many other names, most of them derogatory epithets coined by the larger culture), their stories, their outsider (and sometimes criminal) life and languages, and the discrimination and violence to which they have been subject over many years. But discovering how this culture is embedded in the story is part of the pleasure, so I won't give away any more.

There's a very interesting coda at the end of the story that is told in straight, realistic style but nevertheless verges into the kind of metafiction that Salman Rushdie has exercised, among others. But at the same time, it has a logical (even when it moves in unexpected directions) forward progress that, to me, works better than the stories of the trilogy as a realistic crime novel. McKinty has given us a story that works as a straight thriller as well as a kind of romance, a primer on a little known culture, and a literary tour de force. And, to me, the literary aspect of this book works more integrally with the tale than did those aspects of the trilogy. As I said, it's McKinty's best book so far, which is saying something.

Nice blog! Check us out online at www.cactusfacts.com