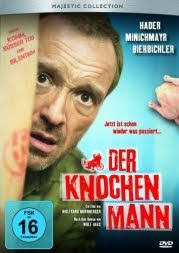 There have been three films made from the crime novels of Wolf Haas, featuring his sometime-detective, Brenner. All three star Josef Hader and were directed by Wolfgang Murnberger. The first, set in Vienna, whose title translates as Come Sweet Death, was funny, a bit disconncted, and looked like a low-budget indy film. Brenner is a detective who lost his job on the police force (by sleeping with his boss's wife) and is now working for an ambulance service. The second film, Silentium, is much more visual (with some striking effects and visual metaphors) and the plot is a bit more straightforward (and also funny). One extended scene, in which Brenner becomes one of the "players" in a foosball table, is hysterical.

The third film, from 2009, translates as The Bone Man, is one of the best crime films I've seen in a long time. It kept reminding me of Blood Simple and The Postman Always Rings Twice, both at the same time. But its humor and storytelling are uniquely those of Haas and Murnberger.

Brenner is now a repo man, sent out to a rural(though under a highway overpass) guesthouse to deliver a last notice to an artist whose Volkswagen beetle is past due for payments. Once there, Brenner is caught in a twisty story of fathers and sons, husbands and wives, sexual difficulties, blackmail, and meatgrinders. The owner of the guesthouse is a fascinating character, alternately friendly and hostile, who has gotten in over his head on several fronts.

The humor is understated and the visuals, though well done, aren't as much in the foreground as that foosball table in Silentium: the emphasis is on the characters and the story. One of the things I liked about The Bone Man, in contrast to most crime movies as well as the first two Brenner films, is that it's about ordinary people rather than VIPs. Even the East European gangsters are of the "mensch" variety, low-level operators rather than international criminals.

I found all three Brenner films on Amazon.de, which may not be the easiest source for a lot of people, though the price was low enough for the films to make the shipping charge acceptable—the DVDs, though, are Region 2, though, so in the U.S. you'll need a region-free player or computer. There are English subtitles, though, and since only one of the Brenner novels has been translated (see my recent review), the films are the best source of the Haas books for a non-German-speaker. I almost hesitate to advice starting the series at the beginning, since I would rate Come Sweet Death as "interesting," Silentium as "very good," and The Bone Man as "excellent." But there are running elements in the series that are best understood if a viewer does indeed start at the beginning. If you find the films less-than-thrilling at first, I'd say stick with them: they get better and better.
Posted by Glenn Harper at 11:48 AM