A Murder in Tuscany, Christobel Kent 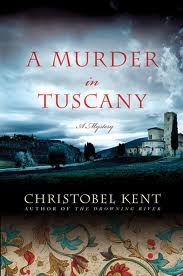 A Murder in Tuscany is the second of Christobel Kent's Florence mysteries featuring private detective (and former cop) Sandro Cellini (there's already a third one, but I haven't gotten to it yet). Most of the action in this book takes place in the Tuscan hills rather than in Florence itself.

Sandro is having trouble building a clientele for his business. He is at the beginning of the story simply tailing a teenage girl, whose father thinks she's getting in with the wrong crowd. He's also beginning to fear that his wife, recently recovered from breast cancer, is drifting away from him.

But Sandro gets a call from an artist's colony in the Maremma hills, whose director has been killed when her car slides off an icy road late at night. But her husband, a prominent attorney, doesn't believe the police's conclusion that her death is simply an accident

The book proceeds very slowly, partly through the eyes of a young woman employed at the artist's colony, and we see a lot of the artists and staff there without really getting to know any of them very well. Several theories of the crime slowly develop, by means of a narrative that frequently twists back on itself. Kent's writing is always clear, but in the back and forth of the characters' recent memories and present moment, it would be possible to get really confused if you put the book down for a while and then try to come back to it.

A Murder in Tuscany is a well written "country house" mystery, more or less in the English tradition, with a closed group of possible suspects and a narrow frame of reference (plus an annoying aristocrat and a "below stairs" contingent. But there's really not much plot. Toward the end the characters begin to move around a bit more, but there's only a brief moment of uncertainty or threat that Cellini and the young employee have to face. Cellini is likably uncertain about his life and his profession, and it will be interesting to hear further about him. But A Murder in Tuscany was a bit too slow for me, a bit of a sophomore slump after her first book, which was a bit livelier.