The last of Harry Hole? 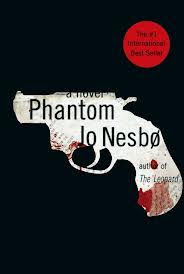 I don't know whether Phantom is meant to be the last of Jo Nesbø's Harry Hole series, but (without giving away any of the plot) it certainly has a elegaic air. A number of incidents and people (living and dead) from previous novels (at least the ones that have been translated) are referred to in passing, and Harry seems to be toching a lot of bases, as if for the last time.

The plot is complicated, with lots of clues and red herrings concerning what's actually going on. And there are lots of cliffhangers along the way (in typical Nesbø fashion), some of which are resolved in ways that strain credulity. But Nesbø has always stretched reality when it suits him, perhaps to the breaking point in The Leopard in particular. here, the parts that are a bit difficult to swallow are just credible enough that you want to look them up somehow, to see if they might just be possible.

Harry returns from Hong Kong but not as a cop. He uses his police connections to help him prove someone's innocence (I won't say who, because some of the sort-of-surprises eve at the very beginning are part of the pleasure of the story). He meets old and new enemies, old and new friends, sometimes without clear lines as to which category in which the characters should ultimately be classified.

There are some passages of bravado writing, such as we've come to expect from the best of Nesbø's books (and I still think the trilogy of The Redbreast, Nemesis, and The Devil's Star are the peak of the Harry Hole books--and please read them in the order they were written rather than the order they were translated). The Bat, the first of the Hole books, is now available in English, and we're apparently going to the the second before too long. After that, perhaps more Harry Hole (somehow) or perhaps more stand-alone books like Headhunters?
Posted by Glenn Harper at 12:24 PM