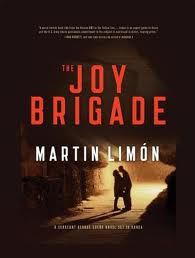 The 9th of Martin Limon's novels set in and around a U.S. Army base in South Korea is quite different from the others, so firmly linked into the series. The 8th novel ended with a cliff-hanger that leads directly into The Joy Brigade, which itself ends with a scene that clearly leads to a sequel.

Army cop George Sueño is on his way to North Korea as the story opens, without his regular partner (who only appears late in the book). George is on a secret mission related to his discovery of possible tunnels under the DMZ and of the location of his former lover, now in the North. What follows is much more an adventure novel than a mystery or a police-procedural, and it's a good example of that style of story. There are some spots that strain credulity (but then that's a basic element of the adventure genre, right?).

George's plan for infiltrating the North falls apart right away, and he's constantly on the run, just ahead of one sort of threat or another, aided from time to time by more or less sympathetic citizens of the North. Limon gives a convincing portrait of the contrast between the grim lives of the ordinary citizens and the privileged situation of the party members and the army. The book's title refers to a brigade of women recruited into prostitution for those privileged classes, in a militarized fashion typical of everything else in the country.

There are a few spots where George's escape from danger seem pretty unlikely (I won't go into detail for fear of spoiling the fun), but the most unlikely part of the story to me is the relative ease with which a foreigner obviously of Western rather than Eastern ethnicity (even in disguise and with false documents) navigates the society in his mission and his escape. Limon has an explanation, which seems logical, if not quite convincing.

So I'd recommend The Joy Brigade to fans of the series, to fans of adventure novels, and to anyone interested in this fictional glimpse of life in the North (quite different from the other crime series set in North Korea, by a former Western intelligence officer who uses the pseudonym James Church).
Posted by Glenn Harper at 1:44 PM