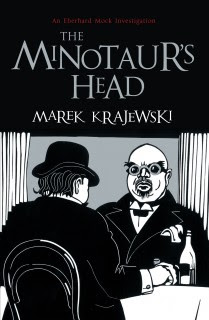 Since 2008, Marek Krajewski's crime novels featuring detective Eberhard Mock in the (then) German city of Breslau have been appearing in English, courtesy first of McLehose Press and more recently Melville International Crime, in the order of their original publication in Polish. Now we have a fourth Eberhard Mock novel, but it looks like they've skipped four of the Polish originals to bring out the 8th novel in English, not the 4th through 7th. It's wonderful to have Mock back again, but I have to wonder about those missing books, especially since the first three were in a very unusual pattern, each novel set earlier than the previous one,not sustainable, of course, unless we eventually ended up with Eberhard Mock, toddler-detective; but I wonder when the pattern was actually broken--since the new book is set after the first three. Mock is now integrated into the German Army, but is sent back into police-work to assist in the pursuit of a serial killer who has struck Breslau after two earlier killings in Lwow.

At first unwillingly, and then fully engaged in the task, Mock is instructed to work with Polish detective named Popielski, a wonderful creation who seems at first totally opposite to Mock, but who actually has some common ground with him. The serial killer seems to be selecting only young virgins to mutilate and murder, and Popielski is in mortal fear that his own daughter will be the next victim.

The situation seems like a normal crime-novel plot, but as anyone who has read any of Marewski's books will know, these are not normal crime novels. Krajewski explores the lower depths of prewar Germany and Poland beetween the wars through not only the crimes but also the character of the thoroughly debased Mock himself. With the more-or-less straitlaced Popielski as a foil, The Minotaur's Head is at first somewhat less decadent than the first three books, but Popielski has some secrets that are gradually reveales, not to mention the gradual revelation of what is actually going on in the murders. By the time we reach the end, we have twisted downn into the murk along with the characters, who achieve a form of justice almost in spite of themselves.

And Popielski seems ripe for appearance, in a somewhat changed role, in future novels (I won't provide any spoilers). The Mock series is very dark and sometimes very funny (also in a dark way). Human appetites of all sorts are explored in the stories, in a style that is both jagged and literary, often with aspects of the author's classical scholarship in evidence (but in a playful way). The arrival of a new Krajewski novel in the landscape of English-language crime fiction is like a lurid spark that illuminates another way of doing and thinking about crime fiction, an illicit pleasure that the author graciously shares with the reader.
Posted by Glenn Harper at 1:09 PM

XxGH0STINxX said...
This comment has been removed by a blog administrator.
11:52 AM