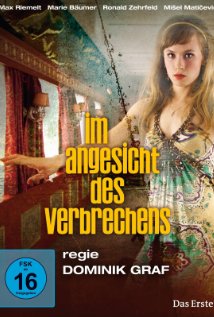 Im Angesicht des Verbrechens, which IMDB translates clumsily as In Face of the Crime (I've also seen it translated as Face to Face with Crime) is a 2010 series from German TV that is in the mode of HBO or BBC crime dramas, in terms of ambition, production, and style. The series is available with English subtitles (one reviewer at Amazon expressed skepticism about the subtitles when he saw the "In Face of the Crime" version of the title, but the subtitles are generally quite good).

There are 10 episodes, about 1 hour each. There's a good bit of repetition and flashback that stretches the story out a bit longer than is really necessary, but that's TV (there was a lot of repetition in the original Danish season of The Killing, even longer at 20 episodes). The story has several threads, each touching upon the Russian mob in Berlin, which has seemingly split in 2 segments that are tentatively at war with one another. One "family" concentrates on cigarette smuggling and legitimate business (such as the Odessa restaurant/club); the other branch is not only getting into prostitution, human traficking, and drugs, but also stealing the more "legitimate" branch's cigarette shipments.

Rather than all out war, the plot shows negotiations and maneuvering between the two factions, and caught in between are the two central characters: Marek, a cop whose Russian-Jewish family runs the Odessa (and the smuggling business), and Jelena, a young Ukranian woman (it's her photo on the DVD box) tricked into coming to Berlin and forced into prostitution. One ongoing thread in the story is Jelena's vision of Marek, while still in her Ukranian village, and the two of them passing one another as they criscross Berlin. The romantic aspect and her struggle against the life she's forced into add a human element to what is otherwise a pretty vicious bunch of characters.

Marek became a cop because his older brother was murdered in the street, and he's an outcast among the Russians, including his own family, who hate cops. He and his partner are ambitious to join an elite detective unit, and their successes and failures bring them in and out of the unit as the story progresses. Among the other threads of the story are a pair of cops who feed info to the Russian mob, Marek's sister, whose husband runs the Odessa, several Russian killers caught up in the maneuvering between the mob factions, and their girlfriends.

There is an interesting equivalence between the cops and the mob, each as ruthless as the other, but the cops are most often out-maneuvered by the criminals. Marek and his partner are more determined, luckier, and more motivated than the rest of the cops, but are frequently being used by one Russian faction against the other.

The result is a bit like The Wire, though Berlin is not quite as lovingly evoked here as Baltimore is in that earlier series, and with a more sincere romance at its center. The arc of the story and the atmosphere are definitely noir, as was The Wire, rather than the conventional TV crime/cop show kind fo thing. As I said earlier, it could have been shorter, but since there's not much German noir on film that's available with subtitles, the availability of this high quality show is a boon for English speakers (though the only version of it that I could find is Region 2/PAL, so if you're in the U.S. you'll need a region-free player.
Posted by Glenn Harper at 1:15 PM

Sure, send me a note at notpd@yahoo.com and I'll give you shipping info.
thanks
Glenn

Rather than all out war, the plot shows negotiations and maneuvering between the two factions, and caught in between are the two central characters

I came across while watching movies. .Thanks for sharing..^__^..I will tell my sister and friends about your blog ...continue to
write an article...I'm looking forward for the upcoming posts you will be posting

Where to watch movies

for more trending news try to visit "
"is now Trending"

The series is available on MHZ Choice.