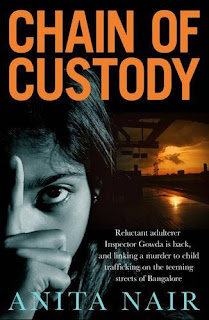 I'd like to hear from someone who's read Anita Nair's first Inspector Gowda book, A Cut-Like Wound, which I haven't read. I recently finished the second in the series, Chain of Custody, which picks up the story after his assistant is recovering from injuries he received in A Cut-Like Wound, and a good deal of the story revolves around his recovery and other threads from the earlier novel. Not that it's difficult to keep up, when starting with Chain of Custody: Nair is careful to include new readers in the story.

Set in Bangalore, Chain of Custody deals with the trafficking of children, in particular a young girl who is the daughter of Gowda's housekeeper. The story shuttles between the Inspector's daily life (the investigation, his wife who has reappeared in his life, his mistress) and the point of view of a young man who works for the traffickers. Gowda's life only skates above the dark underside of the story, while the trafficker provides the heartless underbelly.

The result is dark but frequently amusing, providing a glimpse of Bangalore and India today along the way. Is A Cut-Like Wound a similar blend?

I have read "A Cut-Like Wound" and I would say that it is a blend of a dark underworld and Inspector Gowda's life and work. I thought the narration was unusual because the reader is given a glimpse into the killer's life at different points throughout, and one of those points is very close to the end of the novel. I found that placement to be unusual because I think most novels by U.S. authors would have placed it sooner in the story, as a way to pique curiosity and/or give readers hints to solve the mystery. But in "A Cut-Like Wound," the method and the process, of both the investigation and the writing, seem paramount.

I write a blog myself (http://makeminefilmnoir.blogspot.com/). In fact, I have a link to your blog on my own, but honestly I cannot recall how I first discovered yours. Your blog was how I found out about Anita Nair, so I thank you for the review.