Karo Hämäläinen: Cruel is the Night

There is a locked-room mystery quality to Finnish author Karo Hämäläinen's first novel to be translated into English, Cruel is the Night, along with an homage to Agatha Christie, toward the end. But the best part of the novel is a black comedy told from the varied points of view of the 3 participants, two couples, Robert and Elise and Mikko and Veera, at a dinner party in the London high rise occupied by Robert and Elise. 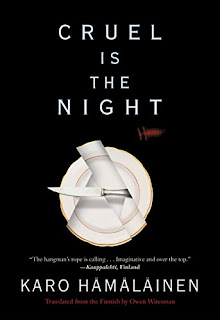 The first two monologues, by boyhood friends Robert and Mikko, and pompous and self-absorbed, qualities that are immediately punctured by Veera's monologue, from outside their self-centered maleness. The Rashomon quality continues with an additional thread about the survivor of the reunion that has brought the couples together (we aren't supposed to know, presumably, who this survivor is, but the language hardly leaves any doubt). So we don't know who the survivor is, or how the presumed deaths of the other 3 occurred, but the mystery isn't really maintained as a driving force of the book, which remains a fairly static series of interrelated blackouts that reveal the interrelationships, obvious and not, of these 4.What draws the reader on is more the comic but emotionally loaded interplay, revealed not only through the dialogue at the party but also through flashbacks to their past, some of which deal with the death of Robert's girlfriend, in their youth (Mikko and Veera became a couple almost by default, as friends of Robert and the doomed girl).
So this is a novel about murder, but not a mystery really. Instead it's a very dark comedy, sometimes witty and sometimes wildly farcical. Forget the slim thread connecting the book to the mystery genre and enjoy the ride.
Posted by Glenn Harper at 6:10 PM