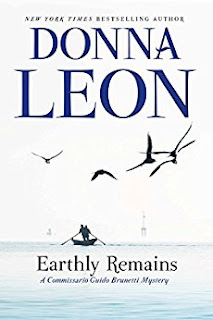 Donna Leon's new Guido Brunetti book follows the typical/atypical pattern of the series, developing slowly toward an ambiguous ending, with familiar and unfamiliar elements along the way. In Earthly Remains, as in some of the earlier books, we are immersed in an aspect of Venice not commonly available to the tourist: in this case woeing (Venetial style) among the outer islands of the laguna.

Brunetti falls into a trap he has created for himself and as a result finds himself taking an unexpected vacation, staying by himself in a villa some distance away from the city, a house belonging to one of his wife Paola's relatives. The caretaker finds out that the detective is interested in spending some time out on the lagoon rowing, and begins a series of excursions that tax Brunetti's muscles but not his ptience (and not the reader's, although there is more about rowing in this particular style than we would have thought we wanted to know). This is a side of Venice way beyond the calle and campi, instead among burds and reeds and especially bees (another major topic of the book, both in the process of the detective's vacation and in the working of the plot.

Of course, there are twists involving a death in the present and a violent incident in the past, as well as currption of a new sort for a series that has often explored corruption. In addition to the faxing natural glories of the region, we also see the industrial mainland, as well as the bureaucracy and the family life for which the series is renowned.

All of the Brunetti books have a dark, pessimistic core, but some are more bleak and some more hopeful. Earthly Remains earns its gloomy atmosphere with a complex portrayal of human nature along with its detailed exploration of nature itself at the edges of Venice's glorious and its dark corners. Leon's strength as a writer is to inveigle the reader with language that seems casual and unforced into following down the book's twisty and twisted path.