A brief word about Anita Nair's A Cut-Like Wound 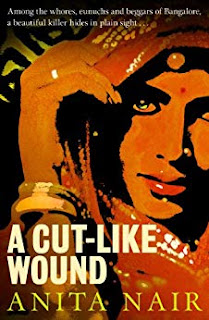 Some time ago, I reviewed Anita Nair's second novel in the Inspector Gowda series, Chain of Custody, not having read the first in the series, the acclaimed A Cut-Like Wound. Chain of Custody seemed to include any explanaations necessary, so that it was OK to start with the 2nd book. Now, having read A Cut-Like Wound, I see that I was wrong. Most of the main characters, especially Urmila, who seems to be his mistress in the 2nd novel, but whose connection to Gowda is much deeper, a link only clear in the 1st novel.

A Cut-Like Wound deals with transvestism and transexuality, but Nair is careful to draw the character of the novel's violence from a person rather than a community. The violence of Chain of Custody is more pervasive, rooted in the trafficking of children, but in that novel the traffickers are personalized in the character of a conflicted young man who is one of the prominent voices of the novel.

Both are significant, involving, and convincing crime novels: but start with A Cut-Like Wound, please.