Beside the Syrian Sea, James Wolff 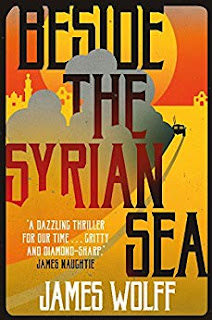 James Wolff's Beside the Syrian Sea is a peculiar spy novel/thriller focused on the effort of a runaway intelligence analyst who goes to the Middle East to try to rescuehis father, who has been kidnapped by Daesh/Isis in Syria. Jonas is both clever and desperate, but he has no field experience in the spy world. He mostly proceeds by lying to everybody and revealing only snippets of the difficult truth of his mission.

He's clearly out of his depth in the complexities of Beirut, and his own British government is trying to stop him from getting involved (after refusing to pay the ransom that Isis demands). He contacts an alcoholic priest (who is a bit of a character out of the novels of Graham Greene), luring him into collaborating on his task by lying and involving not just the priest but the one person in the world that the cleric cares about. Jonas also falls in with Hezbollah (in some of the darker passages of the first part of the novel).

It takes a while for Jonas's plan to become clear, and begin to actually develop, and then it moves quickly but not in a straight line The story is always compelling, but frequently claustrophobic in its focus on Jonass on less-than-clear mind. This is an unusual, and unusually well-written, spy novel, aimed squarely at the grim realities of our current world.