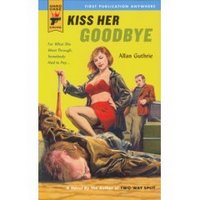 After Allan Guthrie posted replies to a couple of my questions, in earlier posts of this blog, I felt compelled to seek out his novels. I just read the first one I got my hands on, Kiss Her Goodbye, which is apparently his second novel. On the basis of this book, I'll definitely keep looking for the other one, Two-Way Split. People claim that what Ian Rankin writes is "tartan noir," but Guthrie's Kiss Her Goodbye is much more the genuine article--a real throwback (and in some ways a respectful updating) the original noir fiction, the pulp novels of the 50s. Hard Case Crime, the publisher, has recognized this relationship with a noir-pulp homage cover, by pulp paperback master Chuck Pyle. The big difference between Rankin and Guthrie is that Rankin seems always (or at least frequently) to reach for crimes that lead "up" to the middle class, to the government, to the power structure. Noir originally dealt primarily with the criminal class, working class, street life of society. Think of Jim Thompson, James M. Cain, or that pulp classic (by a British writer, I believe) No Orchids for Miss Blandish by James Hadley Chase. I should write a separate post about Miss Blandish, but suffice it to say that this book is exactly the Southern white trash pulp novel that Faulkner originally intended his Sanctuary to be, before his literary sensibility took over, obscuring the very pulpy events by bringing in his larger aesthetic and social concerns. There may be some sort of moral lurking in Miss Blandish, but it's primarily a guilty pleasure. Guthrie's novel is a bit more than that--though it's a fun read too. Kiss Her Goodbye is about the criminal class, but he doesn't patronize or caricature his characters. They never act or talk like cliches. And though his plot is very straightforward, it moves along at the logical pace of his characters' lives, emotions, and motivations. And in spite of the heavy weight of family drama, pain, and death, it's also a funny book (not in the burlesque fashion of Bayswater Bodycount, but in an organic way, appropriate to characters who would not want to be taken any more seriously than they take themselves. I'm looking forward to Two-Way Split. One further point--Guthrie finds a way to solve one of the vexing problems of all crime fiction these days--the cell phone. Nothing is more boring than transcribing people's phone calls--but how do you move people around and get them in face-to-face encounters these days when it's so easy to just call them on their mobile. And how do you maintain suspense and surprise about where people are and what they're doing when most folks would just get the phone out of their pocket and call to find out. Cops can claim (as Simon Kernick cops do in his Murder Exchange) that they'd rather surprise people face-to-face to see reactions, etc. But what about civilians? Guthrie gets his hero so mad that he throws his phone across the room, smashing it to bits. Then he's too busy, in this fast-moving novel, to get another one. Problem solved, and he has to run all over Edinburgh to find people and to find out what's going on.
Posted by Glenn Harper at 4:08 PM

Thanks for taking a chance on KISS, Glenn. Glad you enjoyed it. As for NO ORCHIDS, I thought I was the only person who preferred it to SANCTUARY.