Cathi Unsworth and what's next 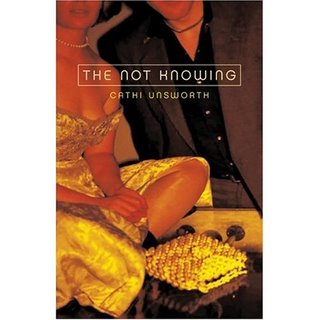 I'm going to talk about a couple more UK writers (the one shown here is the U.S. cover, which I prefer to the original, for a book I've been saving for a while) and then it's back on the international circuit, with two writers from Finland (one writes in Swedish, the other in Finnish), a Cuban, and more. First, The Not Knowing, by Cathi Unsworth, another estimable noir novel from Serpent's Tail. TNK includes an English version of Southern Gothic, like Thomas Hardy crossed with Deliverance (or maybe Daniel Woodrell): at the heart of the novel is a novel-within-a-novel that Unsworth's heroine, Diana, takes seriously as a crime novel, though it's really more "wretched of the earth" kind of stuff. The set-up is that Diana works for a new magazine, Lux, that deals with crime fiction, music, and the culture scene (particularly the scene around what she calls "psychobilly," a marriage of punk and rockabilly that sounds fascinating (I need to do some research and find which bands or what scene she's portraying here--anybody have any ideas?). As the novel gets going, there's a spectacular murder of a filmmaker who's just made a splash with an updating of the great British gangster films of the 50s (and its success has spawned a craze for the style of the Kray twins). The texture of this aspect of the novel is wonderful--Unsworth is able to move back and forth from the film world, to publishing, to the pubs frequented by the musicians, and it's all great fun. Diana is likable, though she falls more into the role of victim than active agent or investigator (kudos to Unsworth, though, for not setting her up as an amateur detective, England is already crawling with those, to judge from the mystery lists). Also to Unsworth's credit is that the denoument doesn't involve any transformation of her heroine into a kung-fu master (mistress?) or any hero-on-a-horse--the conclusion arises from character rather than cliche. But the false heart of the novel, for me, is the novel-within-a-novel--I just can't accept it as seriously as the characters in the novel do. I'd rather be hearing more about some of the minor characters, such as 50s gangster-film star Niall Flynn, whose career was resurrected by the murdered filmmaker's success, or Detective Linehan, who is merely sketched in here, but seems likable and intimidating by turns, a good combination for noir. I'd read another book by Unsworth, though, and hope she fulfills the promise of this first book (apologies for my caveats--maybe it's just me).
Posted by Glenn Harper at 7:55 PM