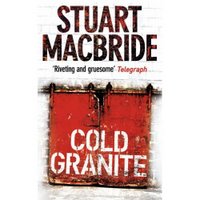 I'm reading Stuart MacBride's Cold Granite (at a reader's suggestion) and not quite done yet. But since I'm not doing plot summaries anyway, I'm going to go ahead and post (since I'll be away from my computer for a few days). Reading Cold Granite is kind of like watching a very good cop movie or TV series, really more Joseph Wambaugh than Thomas Harris, even though the novel deals with a serial killer situation. MacBride keeps careful control of point of view, only leaving his main character's perspective for the occasional preview of a crime scene. That control is a key to the success of MacBride's approach, which is both light and dark, comic and menacing. And, like Wambaugh but unlike even McBain, MacBride captures the flow of personalities, events, non-events, irrelevant occurrences, and false leads that can make a cop story both fun and revealing (not just about cops but about the larger social setting). Cold Granite is set in Aberdeen (the Granite City, apparently) and the setting is gritty and wet (the author all but apologises to the citizens of Aberdeen in an foreword). But the focus is on personality, which allows the comedy to develop naturally (again, as in Wambaugh--though no one would describe a Wambaugh novel as "noir," I think, and MacBride does come closer to the topic of this blog). I'm looking forward to more of MacBride, when I can get my hands on the later novels. One thing about Cold Granite is that it seems to be catching the detectives in mid-series, as if the reader has known about some of the back-story that comes out in little bits through the book--it's an effective device to lure the reader into a series novel without indulging in the kind of "mythologizing," a la, for example, the first episode of the Lone Ranger (if any of you readers remembers that, or if it's still circulating somewhere in the ionosphere). You feel as if you know these characters already.
The general observation is more of a question--I've been thinking about gratuitous, sadistic violence after reading Simon Kernick's novels. There's one passage, a kind of throwaway character analysis that Kernick does a lot, in which a man casually tortures another man with a hot steam iron. The torture is not essential to the novel, just to the character description, and somehow the sadism is more pointed, more sadistic than if it were part of the main thread of the story. Though there's certainly a lot of violence in noir fiction, is there a place for such casual sadism?
Posted by Glenn Harper at 11:15 AM