A Finnish thriller by Kjell Westo (maybe not so thrilling) 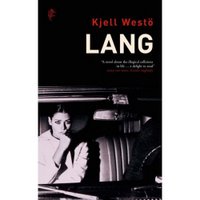 My wife and I have this discussion about TV cop shows: I can't stand it when there's a lot of "soap opera" about the cops' private lives. That's why I like Law & Order and don't like NYPD Blue. And it's why I don't like a certain kind of novel, whether it aspires to noir or not. Too much "soap opera" impedes what Paul Cain referred to in the title of his classic (and classically depressing) A Fast One. The best noir progresses inexorably toward its conclusion. Kjell Westö's novel Lang starts out great: The narrator, an old friend of the Lang of the title, is woken up in the middle of the night by a panicky Lang who needs to borrow a shovel. Great, I say to myself, this has the ring of violence and also comedy--maybe this is another Getting Rid of Mister Kitchen (see earlier posts). But alas no. This is that dreaded sub-genre, the literary thriller. Simply speaking those words condemns the novel, in my lexicon. Too many "art" novelists think they can write a crime novel and when they do, it comes out baggy or full of "soap opera." Westö's Lang mentions the novelist Joyce Carol Oates favorably (while disparaging his girlfriend for reading Bridget Jones's Diary instead). But Westö's novel is a bit too much like an Oates novel, arty perhaps, but not much of a thriller. The novel is in fact a mystery-woman novel of the sort pioneered by Lawrence Durrell in his Justine. Lang's lover, Sarita, has mysterious secrets that make her, at her core, unavailable to Lang. But the real mystery is why she would indulge this pretentious asshole (a novelist and talk-show host) as much as she does. Westö does make fun of his character as a pretentious bore, and he distances the narrative by having a narrator who is a friend, assembling the story from notes that Lang sends him from prison (the end of the shovel incident being foretold in the nature of the narrative). There are also several interesting or comic literary conceits (the letters from prison, not presented directly but referred to by the narrator, recall Humbert's prison confession in Lolita; and the narrator includes a review of his own earlier work written by Lang--a highly unfavorable review). That's all very clever, but how much of the back-and-forth sexual relationship and mysterious former husband do we really have to sit through before the tale of the shovel comes back into the foreground. Writers of art novels do periodically think they can write noir, without realizing that the genre is note a mere finger exercise that they can toss off, or a genre without its own imperatives into which they can simply pour their usual literary interests. The effective crime novel is an art of its own, entertainment perhaps (like the Bridget Jones that Lang disparages though to me an entertainment of broader concerns and interests); But not an entertainment that is simple to imitate. Westö is a Swedish-speaking Finn, part of a linguistic minority within a very distinctive culture--I was hoping for more from his contribution to the crime novel. Next, I'm reading a Finnish language crime novel--maybe that one will be better (and I'm not saying anything about the conclusion of Lang--if anyone cares, leave me a note and I'll add something about it.
Posted by Glenn Harper at 11:53 AM

Is your next book, 'Priest of Evil'? I've just started it but finding it heavy going. If it is, I look forward to your analysis.