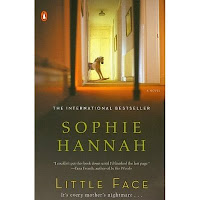 I just got a copy of Sophie Hannah's second novel (the about-to-be-released-in-the-U.S. Hurting Distance) and realized that although I reviewed her third (The Point of Rescue, not yet released in U.S.) a while ago, I'd never reviewed her first (Little Face). Hannah uses a distinctive structure for her novels, alternating first-person narratives by someone involved in a crime (women, so far) with third-person narratives focusing on two detectives, Simon Waterhouse, and his sergeant, Charlotte "Charlie" Zailer in the English town of Spilling. It's OKfor a reader to start the series with later novels, but there's some backstory to Simon and Charlie's relationship that is more fully presented in the first book and retains importance in later books as part of their sometimes tense interactions. The first-person narrative, by Alice Fancourt in Little Face is as other reviewers have noted reminiscent of Charlotte Perkins Gilman's classic feminist tale, The Yellow Wallpaper, in Hannah's use of the interior monologue of a woman in an oppressive household (in this case dominated by a mother in law) just after the delivery of her baby. But Hannah has given the story a twist appropriate for a paranoiac crime novel: Alice suddenly insists after returning from a short outing on her own that Florence, her baby, has been kidnapped and replaced with a look-alike. The police, though skeptical, become involved (and Simon becomes besotted with Alice), and the case of the perhaps-missing baby becomes intertwined with the earlier murder of the first wife of Alice's husband. Hannah keeps twisting the plot--nothing in this book is straightforward: once you've reached the conclusion, you'll be tempted to go back and reassess what you've just read (and if you do that, you will discover that Little Face is very carefully constructed, to support both the main character's paranoia and the final resolution). The setting and characters suggest that the book is a "cozy," but it's definitely not--Hannah's novel doesn't stay within any single genre (part thriller, part police procedural, part character study, even part comedy). It's impossible to say anything specific about the construction of the novel (or about the plot) without revealing too much and spoiling the book for a fresh reader. Suffice it to say that Hannah has established a pattern (and demonstrated her skill in exploiting it) that she is succesfully continuing in further novels (exploiting paranoia, as well as her structure and running characters, without repeating the plots or stories). We want to hear more about Simon and Charlie, and we also want to see what Hannah will come up with next--with the additional anticipation of finding another book by one of those writers who erase the boundaries between genres of crime fiction and call into question the ghettoization of crime writing.
Posted by Glenn Harper at 8:13 AM

I quite liked little face even if it was a bit slow towards the end and the ending was boring. I was expecting it to be someone totally different, or the obvious - David, but no it had to be the typical mother in law.