Kate Atkinson, When Will There be Good News 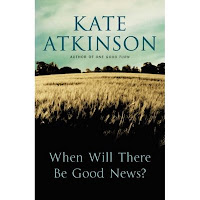 Kate Atkinson's name was shorthand at the recent Bouchercon in Baltimore for a "mainstream" novelist who is doing crime fiction without bearing any of the burden of "genre fiction." Her third novel featuring former cop, former private detective Jackson Brodie, When Will There be Good News, isn't marketed as crime fiction by the publishers (see the covers of the U.S. and U.K. editions reproduced here). Neither cover says "a crime novel," "a mystery," or "a Jackson Brodie novel." And neither cover shows a crime situation. But all those things are publishers' choices: the novel itself seems unapologetic (and not condescending) in its use of crime tropes and crime novel conventions. For instance, almost anything I can say about the plot would be a spoiler. The novel contains a lot of mayhem (kidnapping, mobsters, drug dealers, a train wreck and a car crash, gruesome murders, violent self defense--and the story in fact begins with a mass murder that occurred in the "past" before shifting into the narrative present, rather in the fashion of a lot of crime fiction. Atkinson is more interested in the "surface" of her narrative than some crime writers (the pattern of language and metaphor) but there are certainly those who see themselves as crime writers who are equally concerned with style, texture, and metaphor (Sophie Hannah comes to mind--her first and third novels are fine examples of fiction, let alone crime fiction, and she was at Boucercon as a crime fiction author--her second novel has just been released in the U.S., out of order, and I've just acquired a copy so I'll be coming back to Hannah soon). 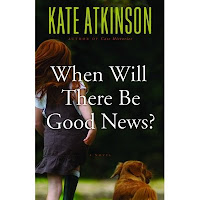 Atkinson uses perhaps more literary references than most crime writers, and I suspect that's one reason she's more often reviewed under a "mainstream" rubric: I have a theory that mainstream book reviewers are prone to giving positive reviews and "literary" designation to books that includeref erences that they will "get," references that the reviewers, at least, assume that "average readers" will need to have explained to them--giving the reviewers a chance to feel superior. However, Atkinson includes a lot of references of all kinds, to pop culture, to consumer goods (and in both those cases some of what she refers to is so U.K.-specific or even Scotland-specific that I have no idea what she's talking about), and the literary references are mostly not highbrow--in fact, the chief patterning device of the new novel is a series of nursery rhymes and traditional ballads and tales that are half-remembered by the characters (right up to the novel's concluding lines). With these motifs and the pop culture and literary references as well, a reader doesn't need to be too concerned about "getting" everything, they're just part of the richness of the book, no more or less than the devices and motifs in the best-written examples of crime fiction. Atkinson is funny in a very quiet (and occcasionally laugh-out-loud) way, in her various cultural references and most of all in the dialogue and the characters' interior monologues, and her underlying topic in the new novel (and the series as a whole) is the bad choices that people make in their relationships (another aspect she shares with crime and noir writing--what other segment of writing and publishing includes so many people making bad choices). The title, When Will There be Good News, is ironic, there not being much good news in the story, and her narrative progresses slowly through a series of encounters among the characters (told in alternating third-person interior monologues from the point of view of several characters), with occasional bursts of violent activity. But the humor, the richly drawn characters, and the mysterious quality of the spiralling coincidences in the plot, and the writer's habit of suddenly bringing in a fact or incident from the past that changes everything we think we know about the story (like a wife we didn't know existed, a previous connection among characters--things I can't be specific about without spoiling the experience of reading the book). Crime novel or not, When Will There be Good News is a very good novel, and rewards attention on many levels (it's possible to argue, for instance, that it's a comic, contemporary Gothic novel, with its many coincidences, impossible love, missed chances, and references to Wuthering Heights). And not least of its rewards are in its uses and subversions of the conventions and characters of the detective or police predural novel--Atkinson's book is up to the standard of the best of contemporary crime writing, so if some folks out there will read a Kate Atkinson novel but not pay attention to equally interesting books by Sophie Hannah, Gene Kerrigan, Arnaldur Indridason (refer to previous posts on this and other crime fiction blogs to keep this list of fine writers going for several pages at least) then its simply their loss (or our burden to spread the word about what a reader will miss by not paying attention to those fine crime fiction writers). The same applies, of course, to a reader who doesn't pick up Atkinson's Jackson Brodie books because they're packaged as "literary" rather than "crime" fiction.
Posted by Glenn Harper at 2:09 PM

It was an excellent read wasn't it? At this stage in my top 10 reads for this year, and in the top 5 of the books I've read that have been published in 2008.
My review is at
http://paradise-mysteries.blogspot.com/2008/09/review-when-will-there-be-good-news.html