Leighton Gage's 2nd, plus a bit on genre 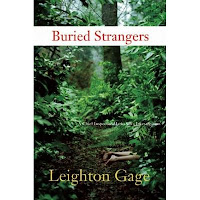 One comment on the emphasis I seem to be putting on sub-genres like the thriller and the procedural, in the light of some discussion of genre and sub-genre at Bouchercon last weekend. I don’t expect writers to be “pure” in their use of the lines I’m drawing--to me, the genre and sub-genre distinctions are only shorthand descriptions I can offer when I’m recommending a book to another reader: if you have a particular taste for one kind of crime writing, you may not be a big fan of another kind (and the trash talk about cozies in Bouchercon is really only the trash that one segment of the readership is talking about another segment). A propos of that discussion and Bouchercon: One of the distinct threads running through “Charmed to Death” in Baltimore was “the Kate Atkinson phenomenon,” mentioned on several panels and in the hallways—shorthand for the use by so-called literary writers of crime-genre tropes and techniques, with a sense of condescension toward the genre by the mainstream press if not the writers themselves. My next “read” is K.A.’s new book, so I’ll be reporting on the Kate Atkinson phenomenon soon--and hoping for some comments and discussion.
Today’s book, though is Leighton Gage's new novel, due out in January. Gage’s major subject, in his series featuring Brazilian federal police chief inspector Mario Silva, is the income disparities and associated ills in Brazil (and in the third world). In this second novel, Buried Strangers, the depiction of this social and economic problem is more diverse, crossing back and forth between urban centers in São Paula and Brasilia, favelas, and small towns. The first half of the book is more police procedural, the reader following various detectives and seeing what's happening as if watching over their shoulders, and the last half is more thriller, with the reader privy to considerably more information than the cops--with some return to the procedural mode toward the end. The story is told in a complex manner, shifting from direct investigation of a group of bodies buried in a jungle-like park, to independent investigation by a local cop of Japanese descent, to Silva's investigation of the missing son of his housekeeper--each plot moving forward in parallel (with frequent digressions into the back stories of various characters), and each story contributing social information and emotional depth to the novel as a whole. Gage's writing, amid all the main and side roads of his story, is clear and straightforward, careful to explain some facts of the local culture but at the same time using local language in such a way that the meaning is clear without translation (adding local color to the narrative). Silva and his crew (his nephew Hector and their associates Arnaldo and Babyface) are also becoming more fully realized characters, and the minor characters (good guys, bad guys, and bystanders) are a diverse and interesting group (I found the cast of characters in the first Silva novel a bit "black and white," desperate peasants and their supporters them versus rapacious landlords and their minions)--though there are some very evil people in Buried Strangers, we approach them slowly, allowing them some humanity before discovering what they're up to, and there's more of a range of innocence and complicity in the larger pattern of laws, corruption, greed, and desperation portrayed). When the thriller plot takes over, even a reader not attracted to that format (such as myself) is swept along into some characters and events familiar from thrillers past (I won't name them because that could give away too much, since these aspects are revealed only slowly, as the story moves foward). By then, there's enough depth to the story, and enough sympathy for the characters, that even familiar themes are well integrated into a fresh and complex tapestry. Certain aspects of Gage’s fictional world resemble both the Brazilian environment of Luiz Alfredo Garcia-Roza’s Inspector Espinosa stories (rampant corruption among the police) and Donna Leon’s Commissario Brunetti novels (rampant venality and incompetence among the higher ranks, with comic effect), but the particularly deep sense of amorality and ethical fog is particularly Gage’s own, and the comedy more of a running thread in the conversations among the characters, particularly the team of detectives. I have to say that I’m still more drawn to the procedural mode than the thriller mode of Gage’s writing (and in the field of crime writing as a whole), and I’m looking forward to the 4th Silva book, which Gage says (in an interview with Uriah Robinson on the Crime Scraps site) will be more of a “stone whodunit,” to quote Bunk Moreland of The Wire. But in the meantime, Buried Strangers is a vivid and entertaining thriller/procedural hybrid. I should mention that I recently gave a less-than-positive review to the first Silva novel, Blood of the Wicked--Buried Strangers may strike some readers, and Gage’s fans in particular, as very much like its predecessor in style and content, but the new novel seemed to me to be tighter, more focused on Silva’s crew, funnier (in the dark way appropriate to the horrors depicted), and more compelling--plus the awful crimes are off-screen, and perhaps more horrible for being left to the imagination, plus a bit less Silence of the Lambs than the torture scenes of the first novel.
Posted by Glenn Harper at 3:32 PM