The last (and first) of Wallander 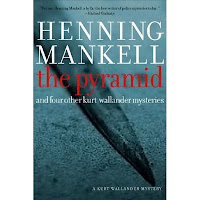 After closing the books on his series of Swedish crime novels featuring Ystad detective Kurt Wallander, Henning Mankell published a collection of five stories under the title The Pyramid, filling in Wallander's career from his beginnings as a cop in Malmö until the beginning of his first "published case," Mankell's first book, The Faceless Killers. In fact, the last story in the collection, also titled "The Pyramid," ends with the phone call to Wallander that begins The Faceless Killers. It's interesting that the dedication of the collection is to Rolf Lassgård, the Swedish actor who starred in a series of TV movies based on Mankell's books. Lassgård's Wallander is amazing--as Mankell implies in his dedication, Lassgård brings not only an uncanny "impersonation" of the character to film, he also brings to the character nuances that amplify Wallander beyond his already substantial presence on the page. Wallander is not a master detective, he's a flawed three-dimensional character whose private life is hopeless (he's particularly unskilled in dealing with women in his personal life) and whose investigations frequently plod along with little progress until one fact comes to light that leads rapidly to a resolution of the case. The prose is very direct, almost flat: short simple sentences in which Mankell seems to be striving much more for clarity than style. In the story collection, Wallander learns his craft mainly by making mistakes, demonstrating to his mentors that he might succeed as a detective only by his curiosity and occasional insights. Mankell shows Wallander's marriage detiorating (though his wife, Mona, is hardly more of a fully realized character here than in the later books, when she's absent), and shows a mentor named Rydberg, often later referred to by Wallander as his model for detective work (but again, Rydberg is not fully present. Wallander is as always front and center, even though the narrative is in the third person--it's his ruminations (almost literally) that make up the body of the stories and the novels, mulling over the facts of the case (and his own unsettled private life) again and again. The first two stories fill in Wallander's early career and marriage, showing both his mistakes in his first case and his empathy with a young African immigrant with whom he is trapped in a robberty gone wrong. The last three stories are very much in the milieu and style of the novels, with most of the familiar Ystad detectives in place and in character and Wallander as already the chief of the group (with the unrespected police chief, Björk, as usual only interested in public appearances). The longest story in the collection deals with a mysterious plane crash and several murders, including a pair of old ladies and a drug dealer, that finally come together in a coherent but mundane plot (that's praise, by the way--I prefer Mankell's more mundane stories to his more global, "high stakes" plots). Of the other stories, The Death of the Photographer is a puzzle regarding the dead man's personality and a secret affair, and The Man on the Beach is a puzzling murder that demonstrates Wallander's intuition as well as his methodical routines. These are very high quality police procedural tales very much in the style of (and with the quality of) Mankell's Wallander books. As you may know, Wallander's daughter and another cop have appeared in later Mankell novels (and Wallander makes a "guest appearance" in the daughter's novel), not to mention several stand-alone novels--but the Wallander books are his best, and will be the stories he's remembered for. And The Pyramid is a fitting sequel or prequel, depending on whether you think of it as the first or last of the series.
Posted by Glenn Harper at 5:42 PM

Thanks for the tip about this one Glenn