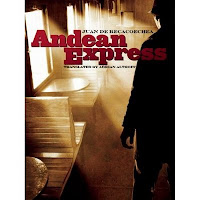 Bolivian writer Juan de Recacoechea's second novel to be published in the U.S. (translated by Adrian Althoff) begins like an homage to the famous Agatha Christie novel suggested by the title: It's the 1950s, and Ricardo, a young man headed for a beach vacation, boards a train in La Paz, along with a colorful cross-section of Bolivian life: a card sharp; a brothel keeper; a priest who isn't what he seems; a newly married mine-owner accompanied by Gulietta, his young wife, and her mother; a cabaret club owner; a cripple; and so on. Almost all of the characters turn out to have a grudge of one sort or another against the mine owner, and Ricardo, of course, is enamored with Gulietta. A murder will occur, naturally enough. But from the beginning there are clues, not to the murder but to the fact that Recacoechea is looking for something other than a murder mystery: there are references to Anna Karenina, Othello, and The Red and the Black, as well as popular romance novels--and Andean Express is at least as much involved in the romance as the revenge, but always with a light touch. In fact, one of the characters refers to the story he's caught up in with the comment that "This could be a Billy Wilder comedy." Recacoechea's first novel to be translated, American Visa, starts out as an ironic comedy of frustration, centered on a man trying to get the document in the book's title, but it veered first into picaresque and then into tragedy. Andean Express starts as a murder mystery à la Christie and veers into farce before becoming a coming of age tale of a sort. Both are pitched by the publisher as noir (the back cover of the new book suggests a pedigree including Jim Thompson and Raymond Chandler), but though American Visa has the inevitability and tragedy of noir, it doesn't have a plot typical of noir; and in Andean Express, the murder is a bit too casual and its consequences are not so much tragic as comic. But we shouldn't get too hung up on genre, despite the appeal to noir by the publisher: Andean Express is a lot of fun, twisting and turning through several genres and offering a tasty selection of shady characters, and an entertaining lesson on Bolivia's social and political history. The pace is fast, the tone is light and frequently funny, there's a high-stakes poker game with lots of cheating, and there's a train journey across the high Andean plain: what more could we ask for in a short, well-paced, tale in an exotic location. Plus where else can you get a synthesis of Stendhal and Some Like It Hot?
Posted by Glenn Harper at 5:51 PM