Literary crime from Istanbul: Songs My Mother Never Taught Me, by Selçuk Altun 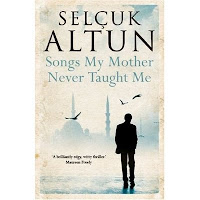 It seems to me that one of the major differences from a crime novel and a "literary novel" that uses crime novel structures is in the tone. Selçuk Altun's Songs My Mother Never Taught Me is a case in point. For over half the novel, there are alternating chapters from the point of view of Arda, whose father was murdered and whose mother has just died, and Bedirhan, a professional assassin who had murdered Arda's father. Bedirhan wants to quit the profession and is on the hunt for his employer, whose identity has been hidden behind a religious organization that has been commissioning the murders. Arda is relishing in his new freedom from his overbearing mother until he is pointed in the direction of his father's murderer and begins to search for him. What's happening has the hallmarks of a thriller or crime novel, but not the tone, which in Altun's novel is light rather than tense, with numerous literary references that are at least in part clues to the author's intentions (the references include Grahame Greene but also Jorge Luis Borges and Paul Auster, and the title is a reference to music by Dvorak). Among Turkish novels widely available in English, Altun resembles crime novelist Mehmet Murat Somer (even though Somer's novels are frequently comic) than the postmodern novels of Orhan Pamuk (though Altun's tone is lighter and more playful than Pamuk's). Fairly early in the novel, Arda mentions a family friend named Selçuk Altun, a banker and novelist. That bit of metafiction becomes more important in the last third of the novel, when Altun becomes a puppetmaster within the novel, as well as its author, giving a series of clues about Bedirhan in the form of locations around Istanbul. Arda's quest becomes an unconventional tour of the city and its history rather than a hot pursuit of the killer. Songs My Mother Never Taught Me is both fun and challenging, rather like satire or the dada or surrealist novel The Eater of Darkness, mentioned here last year, particularly in the quirky narrative tendency to veer off into new stories and references that hang loosely from the central thread. Songs My Mother Never Taught Me gives a palpable sense of Istanbul as well as a political and historical vision of Turkey. As a crime novel, it belongs in the more metaphysical and literary branch of the genre, somewhere between Kate Atkinson and Garbhan Downey or Teresa Solana, among recent literary crime fiction.
Posted by Glenn Harper at 5:54 PM

Hi: I liked this book as well, for two reasons: one, Altun pans moustachioed men, and two, he offers glimpses of an Istanbul that's ignored by visitors. And, as you say, it is a funny self-deprecating book.