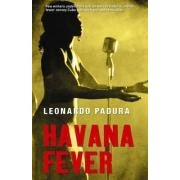 Leonardo Padura's Havana Fever, translated by Peter Bush and published by Bitter Lemon Press, is a very good book. Padura embeds a crime novel with resonances from Cuban history to Sophocles, from J.D. Salinger to Dickens and Dante. Padura uses his detective-hero Mario Conde from the Havana Quartet (plus Adios Hemingway) as a thread on which are hung several strains of Cuban history. Conde, now a used book dealer (really more of a book scout) discovers a valuable library in a decrepit mansion, and in one of the books there is a clipping about a bolero singer of the late 1950s who suddenly retired (after recording one 45 rpm record). Through the historical and rare books in the library (as Conde and his cohort go through them in order to make an offer to the owners) the colonial history of Cuba is told. Conde becomes fascinated with the bolero singer and her death, and through her Padura tells the story of Batista, the revolution, the mob-owned nightclubs, and the liveliness as well as the misery of the Cuban 1950s. As has been the case in the other Conde novels, the now-former detective and his expanded circle of friends are a collective device through which the history of post-revolutionary, post-Soviet, and contemporary Cuban history are told. And above all Havana, in its decaying glory, runs through everything. The novel is split in half, the first part corresponding to the A-side of the bolero singer's 45 and the second half corresponding to the B-side. But even more, the first half is Dickens and the second half is Dante. The crumbling mansion, the rich history of the old books, and the family dwelling in the house (aged brother and sister plus mad, ancient mother upstairs) are pure Victorian Gothic (there's even an epistolary thread running through the whole book and leading to the apprehension of the criminal). But a murder thrusts Conde back into an investigation that leads him into the Havana barrios where now drugs, gangsters, hookers, and despair reign as in a circle of hell. In both sections, the narrative has a despairing poetry beyond even that of the earlier Conde novels (which were themselves eloquently dark and poetic). The novel is fully a crime novel, but also an elegy for Havana and for Conde, whose trials and tragedies lead to a kind of catharsis and reconciliation that seems to mark the end of the series (I won't give away the ending, which is rooted not only in this novel but in earlier stories). It wouldn't be altogether necessary, though, to read the others in order to appreciate Havana Fever, which stands on its own, as crime fiction and as a powerful and evocative novel. Lest any of the above suggests a ponderous literary tome, rest assured that Padura's writing is accessible, his characters are vivid, and his storytelling laced with lively and even raunchy details of everyday life.
Posted by Glenn Harper at 5:53 PM