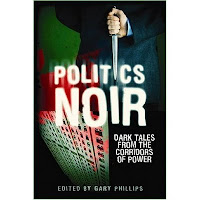 Of the 13 stories in Politics Noir (edited by Gary Phillips and published by Verso) all but two (Ken Bruen's grim take on postwar gangster politics in Belfast and Sujata Massey's venture into an Imam-dominated town in Pakistan for a wish-fulfillment fantasy) are set in the U.S., and only 2 deal with national politics, and those 2 are among the weakest of the bunch (one is a fantasy about dirty pictures implicating Nixon and J.Edgar Hoover, one is a gratuitously mean and unfunny parody of the Clinton-Obama primary campaign, and by far the best of the 3 is Michele Martinez's tale of the rise and fall of a woman with a talent for the realpolitik of Capitol Hill). It's quite appropriate that state and local politics should be mostly the focus of a collection of noir tales, since it's the down and dirty of the local situation that is the heart of noir (and most of the stories touch on sex in some way, another appropriate element of noir). Pete Hautman's wonderful take on bloodthirsty Republican politics and public art in Minnesota is the best of the lot (and the funniest). Twist Phelan's teenager-runs-of-with-the-payoff story is very dark and bloody and effective. Darrell James works a double-double-cross in North Carolina and Black Artemis takes us into hip-hop politics in the Bronx. K.J.A. Wishnia's tale of a P.I.'s crusade against vote-suppression fraud aimed at the Latino community if perhaps the truest (though not the least bleak) of the stories. This is not the best of the many "Noir" this or that collections that have been coming out lately, but perhaps half the stories are interesting and amusing, not a bad average.
Posted by Glenn Harper at 2:03 PM

Glenn, I am glad you enjoyed "Strange Bedfellows." It was my second foray into noir, a place I like visiting.