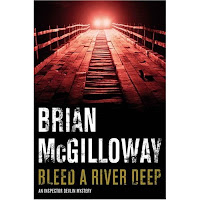 The blurbs for Brian McGilloway's third Inspector Devlin novel, Bleed a River Deep, suggest a story that in lesser hands would have been a generic thriller: an American right-wing former Senator (and former IRA supporter) arrives in Ireland for the opening of a new gold mine run by an Irish-American company, and in spite of the senator's own protection and the efforts of Devlin and the gardai, the American celebrity is shot at. Shades of international incident and conspiracy? Not in this case. The hints of sensational thriller plot are only small elements, just some of the threads among others that focus on illegal immigrants, cross-border smuggling, and eco-activism, all in along the border of Northern Ireland and Donegal on the verge of the Celtic Tiger's collapse. And rather than a supercop, Devlin is constantly in hot water when his mistakes make things worse for the immigrants, the gardai, his old friends, and himself. His new boss is on his case, and he gets suspended early on in the book; for a good deal of the story he's acting more like a private detective than a copy (almost as if McGilloway is preparing a career change for him). It is Devlin's empathy and conscience that make the books interesting and give them depth beyond the average police procedural (and Devlin's home life is shockingly normal, for a crime-novel cop). The ccomplications of crimes and criminals crossing back and forth between police jurisdictions adds particular interest, taking advantage of historical tensions as well as more normal jurisdictional disputes. McGilloway is unafraid of events that change his cast of characters (as has been seen in previous novels) or of unresolved plots. Bleed a River Deep's conclusion is satisfying to the reader without being satisfactory for Devlin and a number of other characters. McGilloway deserves the attention he has been getting for his Devlin novels: he's stretching the boundaries of the crime novel without condescending to the genre, and his novels deserve even wider recognition among crime fans and general readers. A question for those who know better than I what's happening in the translations of the new Irish crime wave: are readers outside the English-speaking world getting access to the fine crime fiction of McGilloway, Declan Hughes, Declan Burke, Gene Kerrigan, etc?
Posted by Glenn Harper at 11:08 AM