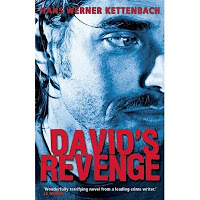 The two crime novels by Hans Werner Kettenbach that have been translated so far (both translated by Anthea Bell and published by Bitter Lemon Press) have a carefully controlled point of view. In the new one, David's Revenge, we see everything through the eyes of a middle-aged schoolteacher who is married to a lawyer and has a teen-aged son who is an incipient skinhead. But Christian does more than narrate: he tells himself stories, spins rationalizations of his behavior and that of others, wraps himself up in his story-inspired notions of what is happening around him. The result is a particularly claustrophobic paranoid thriller, brought down to human (rather than global) level within a bourgeois German household. Regardless of this domestic focus, the plot is political: a post-Cold War tale of (possible) spies and collaborators in the newly united Germany and the newly liberated Georgia, thrust then (as again recently) into bloody civil war based on the country's former and current relations with Russia. The novel begins with a letter from Georgia from a translator, David Ninoshvili, whom Christian had met at a conference in Tbilisi a few years earlier, and who is now announcing that he's arriving in Germany to stay in Christian's guest room while pitching Georgian literature to German publishers. Christian remembers David and especially David's wife, with whom Christian had almost had an affair. The whole story turns on what David might or might not have known about the interrupted affair, and on who David might actually be now and have been then: a KGB or Georgian intelligence officer who lured a German into a compromising position? A jealous husband bent on revenge? Christian is quite a different character from the narrator of Black Ice, Kettenbach's previously translated novel, who was a bit slow intellectually. Christian is an intellectual and a seasoned high school teacher and drama instructor. Rather than piecing together the puzzle of what might have happened, as in Black Ice, Christian evolves through a series of reinterpretations of David and of his own wife and son (whose relationships to David change through the course of the novel), through the narration of events and through the stories (told in the present tense, as we would tell a joke--"a dog walks into a bar...", at least in English) that Christian's interior monologue repeatedly lapses into. As with Black Ice, though, the murder and mayhem are all off-stage, and Christian only catches glimpses of these events second-hand, through the TV and newspapers. Christian is an ordinary guy, caught up (or not) in international intrigue and suddenly fascinated by the history and literature of Georgia and its relationship to Germany. What Kettenbach is up to is not a Le Carre sort of thing, not even the post-Cold War Le Carre. His novel brings down the big-issue politics, the still active intelligence apparatus, and murderous crimes to the living room, to now, to the schoolroom, and to the bedroom and to the interior of an ordinary man's dialogue with himself.
Posted by Glenn Harper at 8:41 AM