Declan Hughes, All the Dead Voices

The fourth of Declan Hughes's Ed Loy crime novels is just coming out the U.S. now. The novel brings together the uncertain future of the failed Celtic Tiger and the deadly past of the Irish Troubles. The Troubles lurk in the background of any contemporary Irish crime novel (certain elements that had used crime to finance their violent actions are simply continuing their career as criminals now), but the IRA, INLA, etc., figure in All the Dead Voices more than in the first three Ed Loy novels. And it's a bleak picture that Hughes draws, of gangsters and good citizens that share a common violent past but have moved on in disparate ways, and of the new violence of an urbanized Dublin. As always, though, Hughes grounds his story in that most violent and turbulent of human institutions, the family. Loy is hired by two families in distress: a gangster who has fled to Greece asks him to look after his younger brother, now a celebrated footballer; and a young mother asks him to find out who murdered her father years before (her mother's lover had been jailed for the offense but released on a technicality, but the Gardai believe he did it and refuse to reopen the case).

The two cases inevitably intertwine, as Loy moves back and forth around Dublin among the cops and the gangsters, often becoming the subject of "unwanted attention" from both. There are a lot of characters (and a lot of murders), sometimes a little hard to keep up with the plot, but Hughes skilfully reiterates the story through Loy's overlapping interrogations of the suspects and victims--if the reader momentarily forgets what's going on, the narrator (whether Loy himself or the non-Loy-narrated sections concerning the gangster who hired him and a family in Armagh 20 years earlier) will set you straight. The plot goes off in some unexpected directions: just when you think you're headed for a predictable or operatic crescendo, Hughes undercuts that expectation with casual violence or the withdrawal of an expected twist. And at the end, amid the nearly Jacobean mayhem, there's a hint of redemption for Loy and those around him. 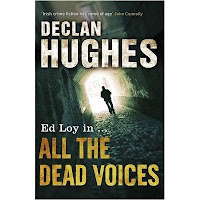 I see that Loy is off to his former home-in-exile, L.A., in the next book, and into a serial-murder plot that will threaten that very redemption--but we'll have to wait until next year for that. A word about covers--I'm pasting three images of the U.K. and U.S. covers as well as a Harper-Collins cover that apparently was rejected but still appears on the publisher's website (as H-C is the parent of Wm. Morrow, the titular U.S. publisher). In the U.K., someone (Loy?) is headed into a tunnel and in the U.S. released version he's headed over a bridge. Whereas the U.K. cover looks like a film poster ("Ed Loy in..."), the U.S. version is cluttered with text (blurbs and award announcements). All in all I like the unreleased U.S. version best (the one at the top of this blog post), though it misspells John Connolly's name in the blurb on that one, and there's a bit of Gothic type that doesn't quite work. Thoughts, anyone?
Posted by Glenn Harper at 9:45 AM

I like the UK cover best, but the US released version at least does have a recognisable Dublin landmark on the cover - the halfpenny bridge over the Liffey. The green and red one is also a picture of Dublin as well, I think - top of Westmoreland Street with Trinity College on the left and Bank of Ireland on the right.

Glenn - The trippy cover is Cover of the Year for me.