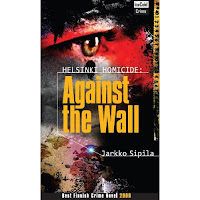 It is perhaps unfair that I'm reviewing Harkko Sipila's Helsinki Homicide: Against the Wall right after reading and reviewing Garry Disher's Blood Moon. In contrast to the Australian novel, the characters in Sipila's Finnish police procedural are rather flat. The plot is very good, in the hard-boiled, no nonsense tradition (more on that in a minute) but the characters are so little delineated that it's frequently hard to tell one from the other (hence the list of characters in the front of the book, which is helpful and perhaps necessary). Most of the cops simply blend together, except for Detective Lieutentant Takamäki and undercover cop Suhonen, who are at the center of the story and are boss-and-subordinate but other than that little differentiated from one another, despite some amusing banter among the cops, as well as collegial irritation about some of Suhonen's tactics. The same is true of the bad guys, who seem to be little differentiated except by categories: thug, prison gangster, narc, boss, and within categories they can be hard to tell apart. As I said, perhaps Disher's skill at making characters (even minor ones) come idiosyncratically alive proves to be an unfortunate contrast when considering Sipila's novel. The flatness of the characters actually suits the plot fairly well, reinforcing the noir/pulp quality of the book (and that's not meant in a derogatory way, I like noir/pulp fiction). This book could be an updated version of those straight-to-paperback tales of the 1950s, Jim Thompson included. The mystery aspect of the plot is undercut about 2/3 of the way into the story when the reader is informed by the narrator about who the killers are, long before the cops figure it out. Again, that's not really a problem for me--one of the most interesting aspects of the story is a double-dealing plotline concerning a mid-level gangster who's ripping off his boss and covering his ass--one of the most interesting characters and plotlines, and one that requires the mystery aspect to be set aside. The plot winds around, coming back to the seemingly unrelated prologue just as the story picks up speed and everything comes together for an effective twist-and-turn conclusion something like Elmore Leonard’s realistically quirky plots, but at the same time reminiscent of the comic mayhem of the amazing Finnish TV series, RAID. The best part of the book, though, is its palpable sense of the winter cityscape of Helsinki and the street-level history of the city (such as a corner where a famous cop-killing happened). For that alone, I can recommend the book, though it’s pulp-y, plot-heavy quality puts it in a different category of the fleshier novels. Sipila and his brother have set up a publishing house, Ice Cold Crime, to bring his own and other Finnish writers to English-speaking audiences—including, I understand, something by Harri Nykänen, the author of the books upon which the aforesaid RAID series is based. So please, go buy this book (despite my own reservations): we should encourage publishers who bring more crime writers to our attention from countries like Finland! It is, by the way, an attractive book in a nice, small-ish format, easy to carry back and forth on the Metro train while commuting, as I can attest. To read Barbara Fister's more positive view of Sipila's quick character sketches, and of the novel as a whole, click here.
Posted by Glenn Harper at 11:40 AM